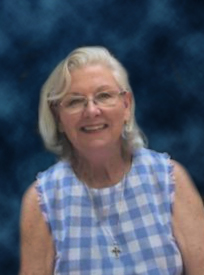 Helen Louise Spurlin Stewart passed away on Wednesday, August 4, 2021 at the age of 69.

Funeral services will be held at 11 a.m.  on Saturday, August 7, 2021 at First Baptist Church of Selma, Alabama with graveside services to follow at 3 p.m. in Union Springs, Alabama at the Union Springs Perpetual Care Cemetery with Dr. Jerry Light and Reverend David Stewart officiating and Lawrence Brown-Service Funeral Home directing.

Helen was the oldest of three children, and she is survived by her brother Mr. James Thomas Spurlin, Jr. (Jimmy) and his wife Patti Spurlin of Fitzpatrick, Alabama and her sister Ms. Rebecca Spurlin Freeman (Becky) of Auburn. In 1970, she married Mr. James Alfred Stewart, Sr. (Alfred), and they moved to Selma, Alabama where she resided until her death. Helen was a loving wife, mother, and grandmother. One of her greatest joys was spending time with her grandchildren.

A visitation will be held on Saturday, August 7, 2021 starting at 10 a.m. at First Baptist Church of Selma, until time of service.  In lieu of flowers, memorials may be made to the Selma Public Library; 1103 Selma Avenue, Selma, Alabama 36701.

Clara Atkins, resident of Orrville,  passed away August 3, 2021. Service details are incomplete at this time, but will be... read more