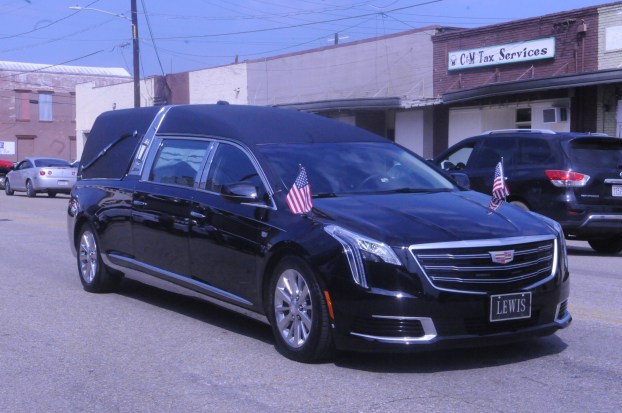 Under partly sunny skies, Law enforcement across the state met at the Selma Police Department on Thursday morning to honor a fallen SPD officer.

A 45-minute funeral processional left the SPD office on the 1300 block of Alabama Avenue, took right on Broad Street and proceeded down Highway 22 in Valley Grande. Lewis Brothers Funeral Home led the processional with Moorer’s casket, followed by three limousines with Moorer’s family.

City Police from Northport, Prattville Wetumpka, Montgomery, Maplesville, Moundville, Greenville, Demopolis, University of Alabama, Chilton County Sheriff Office, Montgomery Sheriff Office were among the law enforcement that were on hand to support the SPD and honor Moorer, who was killed on July 27 at Selma Square Apartments.

Officers from Dallas, New York,  and Chicago were also present.

Former Selma Police Chiefs John Brock and William Riley both spoke about the tragedy. It’s the first time since 1946 when a SPD officer was killed.

“This is a new thing for all of us,” Brock said. “it’s been the first since 1946 when we lost a Selma police officer. We’re going through the protocol.”

Added Riley: “It’s sad, but unfortunately, this is a reality. Being a police officer is dangerous. Moorer gave his life to the city of Selma and the country.”

“It means a lot for you to show up and support, we appreciate it,” Fulford said.

Selma Mayor James Perkins Jr. called one of the worse in his terms as Mayor.

“We are grateful for the outpour of support,” Perkins said.

Moorer was 25 years old and a Wilcox County native. He was a SPD officer for three years. He played basketball at Wilcox Central.

Snow’s Cleaning Service owner LeMarkus A. Snow was Moorer’s cousin and he shared those memories of them growing up.  Moorer was a father of two.

“Moorer was quiet and did not bother no one,” Snow said. “He loved being a police officer and wore his badge with pride.  He was a young officer, father, one who was loved by many. He’s gone but not forgotten. In the next 20 years, he may have been Police Chief in Selma.”

Javonte Cornius Stubbs, 18, is charged with capital murder in Moorer’s death. Moorer was on duty and was taking a meal break at his home at Selma Square Apartments when he was shot between 3:30 and 4 a.m. Moorer’s significant other, Shakiaria Barley, was shot in the leg.