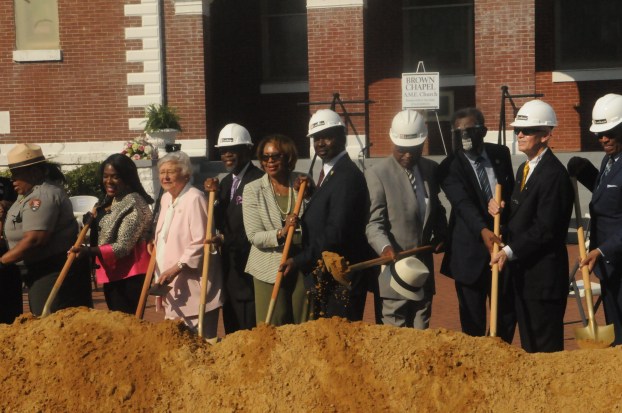 Alabama Governor Kay Ivey  and U.S. Rep. Terri Sewell were among the speakers at the restoration groundbreaking ceremony that included a shovel ceremony at the end.

Brown Chapel was built in 1908 and its repairs will the chapel’s facelift will include electrical work, roof work and cupola repairs.

Sewell recalled growing up in Selma and attending the church with her family. She thanked the National Park Service for its $1.3 million grant for the church’s restorations and repairs.

“It’s always good to be back in Selma,” Sewell said. “This $1.3 million grant from the National Park Service will do is to ensure that America’s story lives on, that we who are members of this great church are not alone in preserving it because this church is a part of America’s history.”

Ivey praised Brown Chapel for its role that led to the Voting Rights Act of 1965.

“The love of Brown Chapel AME Church will forever be shared by our state to the world, to be a representative of doing the right thing even when it can be dangerous,” Ivey said “Brown Chapel serves as a reminder of perseverance.”

Perkins joked about praying for a breeze to come through on a sultry afternoon.

“My prayer was answered,” Perkins said.  “For all of our success and challenges, to God be all the Glory.”

“It’s a great day for the city of Selma to honor the headquarters for the Voting Rights Act,” Nunn said.

Johnson thanked Gov.  Ivey and Sewell for attending the ceremony.

“You crossed a line where others did  not have the courage to cross,” Strong told Gov. Ivey.

“We looked forward to this day for a while and what a great day it is,” Denson said.

“I call Brown Chapel the mother of our 285 churches,” Seawright said. “It represents the Civil Rights movement.”

Selma to Montgomery NHT Superintendent Dr.  Joy Kinard represented the National Park Service and said it’s an honor being part of the event.

Dr. Leroy Maxwell, who presided over the event, presented Sewell with a plaque honoring her late mother, Nancy Sewell, a longtime member of Brown Chapel AME and 36 year teacher in Selma.

By Dennis Palmer The Selma Times-Journal The City of Selma received some big news recently with the release of the... read more