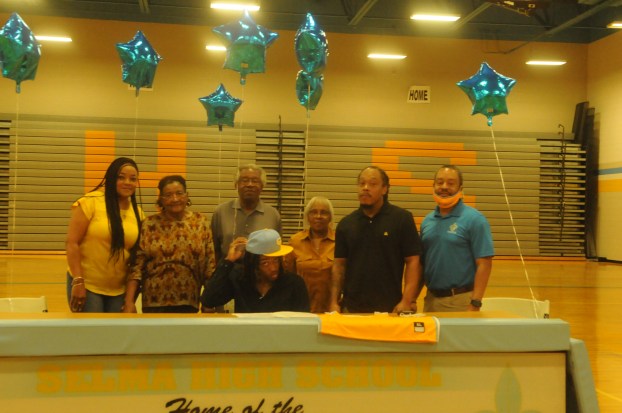 Moss signed a scholarship with CVCC on Monday at Selma High School Gymnasium before family and friends.

“The coaching staff just made me feel wanted and they will get me better and ready for the next level,” Moss said.

Moss was named The Selma Times-Journal co-basketball player of the year, averaging 20 points and four assists a game.

“I’m impressed with Jarvis’ basketball and he’s a high character kid,” Hicks said. “We lost a lot of players and he fits what we want to do at  Chattahoochee Valley Community College.’’

Selma High basketball coach Daron Rembert believes Moss has a chance to shine at the JUCO level and eventually to a four-year school.

“Jarvis is a hard worker who loves the game,” Rembert said. “His work ethic will allow him to transition and enhance his natural ability to shoot and handle the basketball. He is willing to take the shot with the game on the line, not afraid of the moment.

“It’s a happy and sad moment for me. I’m happy that he gets the chance to move on and keep playing basketball. I’m also sad because the four years have gone by so fast.”

The 6-foot-1 Moss had a stellar senior year, earning third-team Class 5A All-State honors. He also made the South squad in the AHSAA All-Star basketball game last summer.

Morgan Academy’s baseball season ended on Wednesday. The Senators were swept by No. 1 Pike Liberal Arts 6-3, 6-0 in... read more