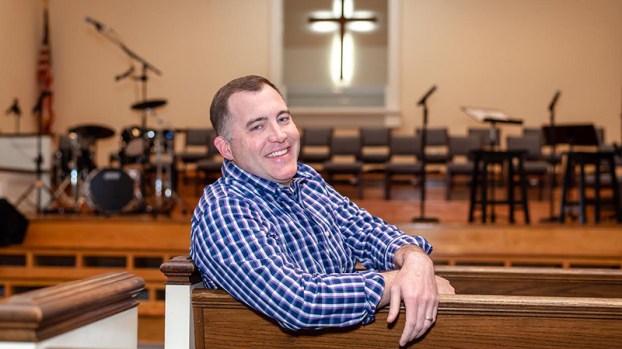 After more than a decade behind the pulpit at Elkdale Baptist Church, Rev. Cory Horton will preach his final sermon in Selma on Sunday before moving to Greenville, South Carolina, where he will serve as Senior Pastor of Brushy Creek Baptist Church.

“Serving as the pastor of Elkdale for over a decade has truly been a blessing,” Horton said. “Arriving as a young minister with no prior pastoral experience, one of the most gracious gifts of God has been to pastor a church that has supported me as I grew into this role.”

Horton was affirmed as Senior Pastor at Elkdale in February 2010 – he was 28 years old at the time and two weeks away from completing his master’s degree at New Orleans Baptist Theological Seminary.

He and his family – wife, Wendy, and two children, Cade and Emma – moved to the Queen City in Talladega, where he had served in a Christian camp ministry. Since then, Horton’s family has grown to include a third child, Addi, and he has added a doctorate degree from Southern Baptist Theological Seminary to his qualifications.

For Horton, Elkdale provided a launch point for his growing work as a pastor.

“Preaching weekly for over a decade has certainly caused me to grow as a communicator and be even more convicted that the church needs men who will open the Bible and preach it verse by verse, page by page,” Horton said. “I have also grown pastorally. One of the great lessons that the Lord has taught me is that I cannot fix very much. It is God that works in the heart of man, it is the Holy Spirit that leads people, and it is men and women yielding to the truth of Christ.”

Beyond his work in the church, Horton worked as chaplain for the Dallas County Sheriff’s Office (DSCO), work he called a “wonderful privilege.”

“I was blessed to encourage and pray for them as they perform very dangerous and stressful jobs,” Horton said.

Over the last 11 years, Horton also coached Upward soccer, baseball and softball, taught lifeguarding lessons throughout the city and worked alongside educators and students at Valley Grande Elementary School and Martin School.

For Horton, the people of Selma will be the biggest thing he’ll miss as he takes the position in South Carolina.

“Spending as much time as I have in this great community has afforded me the opportunity to build rich relationships with people both inside and outside of our church,” Horton said. “I have especially been blessed by the men who serve as deacons at Elkdale and the extremely gifted and talented staff that has served alongside me.”

On Tuesday afternoon, Alabama Gov. Kay Ivey issues a state of emergency for all 67 counties ahead of expected severe... read more