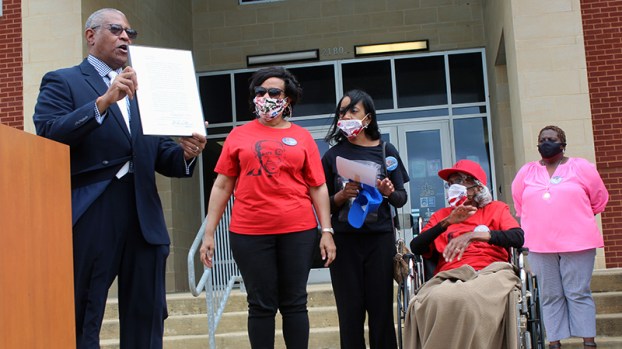 The city celebrated its first F.D. Reese Day Monday, beginning with a series of presentations on the steps of Selma High School, where Reese was once principal, before embarking on a grand caravan across several iconic locations throughout the city.

During his comments, Moss reflected on his time as a Selma High School student when Reese was principal, recalling that he would often pray with the students who were sent to his office for “minor infractions.”

Moss said the day to honor Reese was “long overdue.”

Selma High School Principal Stoney Pritchett also spoke and recalled an encounter he had with Reese while a college student – Pritchett said Reese implored him to return to Selma City Schools and, while originally hesitant, he was “elated” to follow in Reese’s footsteps as the school’s principal.

Representatives from the office of U.S. Rep. Terri Sewell, D-AL, were on hand to present a congressional proclamation in honor of the day, which was presented to member of Reese’s family.

A series of proclamations were read thereafter, including one from Ebenezer Baptist Church, where Reese was pastor, which was read by Ebenzer Baptist Church Deacon Board Chairman Charles Johnson, who recalled that his father was there to welcome Reese on the day he took the helm at the church.

Perkins read proclamations from both the city and the mayor’s office, noting that Reese “redefined” the political landscape of the nation through “civil disobedience.”

Nunn also noted the significance of working in the Dallas County Courthouse, which was the site of the Reese-led voting rights march.

Jackson asserted that there is “no more important person” in the Voting Rights Movement than Reese and encouraged everyone to honor his life’s work by getting out to vote.

Alan Reese, second grandson of F.D. Reese, spoke briefly before the crowd departed for the caravan, which traveled to Selma City Hall, the Dallas County Courthouse and other sites before crossing the Edmund Pettus Bridge.