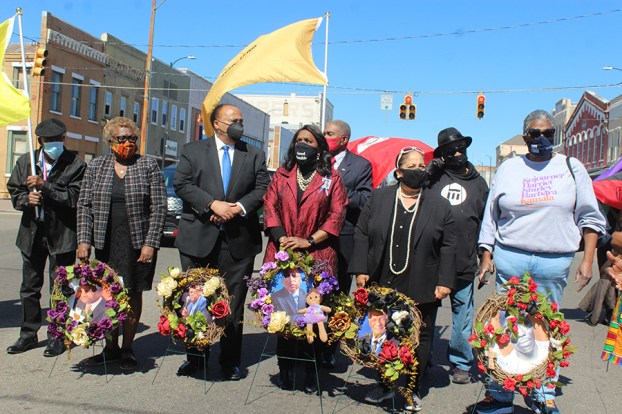 A new executive order from President Joe Biden on voting rights access and tribute to five Civil Rights icons were the highlights at the 56th annual Selma Bridge Crossing Jubilee.

For the first time in its 56-year history, the Bridge Crossing Jubilee was virtual because of the COVID-19 pandemic. On March 7, 1965, civil rights marchers were brutally beaten by law enforcement officers known as “Bloody Sunday.” It eventually led to the Voting Rights Act signed by then-President Lyndon B. Johnson.

On Sunday, Sewell paid tribute to Lewis, who was her mentor and friend.

“Each year, we return to the Edmund Pettus Bridge to honor the heroic sacrifices made by those Foot Soldiers, but this year, we will do so without my beloved friend, Congressman John Lewis,” Sewell said.

“While my heart breaks knowing that John will not lead this year’s commemorative march, my hope is that we will rededicate ourselves to his life’s work by restoring the full protections of the Voting Rights Act.  As we’ve recently seen in state legislatures across this nation, voter suppression is alive and well. That is why we must pass H.R. 4, The John R. Lewis Voting Rights Act, to ensure all Americans can fully participate in our democracy.”

“The legacy of the march in Selma is that while nothing can stop a free people from exercising their most sacred power as a citizen, there are those who will do everything they can to take that power away,” Biden said.

“It was jam packed with inspiration, emotion, history, and exemplified the versatile power of people fighting for positive social change,” Glover said. “For the first time in history the event was made available to a global audience and portions of the weekend have already been viewed by over 150,000 people.

“Also, for the first time every moment of the Bridge Crossing Jubilee was recorded and will be made available for viewing throughout the rest of the year making this year’s event the most viewed commemoration in history.”

Glover also thanked several organizations who made the jubilee successful in his first year as principal coordinator.

“I want to thank the hundreds of people who were involved in the creation of the event and especially express my deep gratitude to our main sponsor Go West Creative for their amazing work,” Glover said.

Google Cloud finalized an agreement late Thursday in which it will serve as sponsor for the 56th Anniversary of the... read more