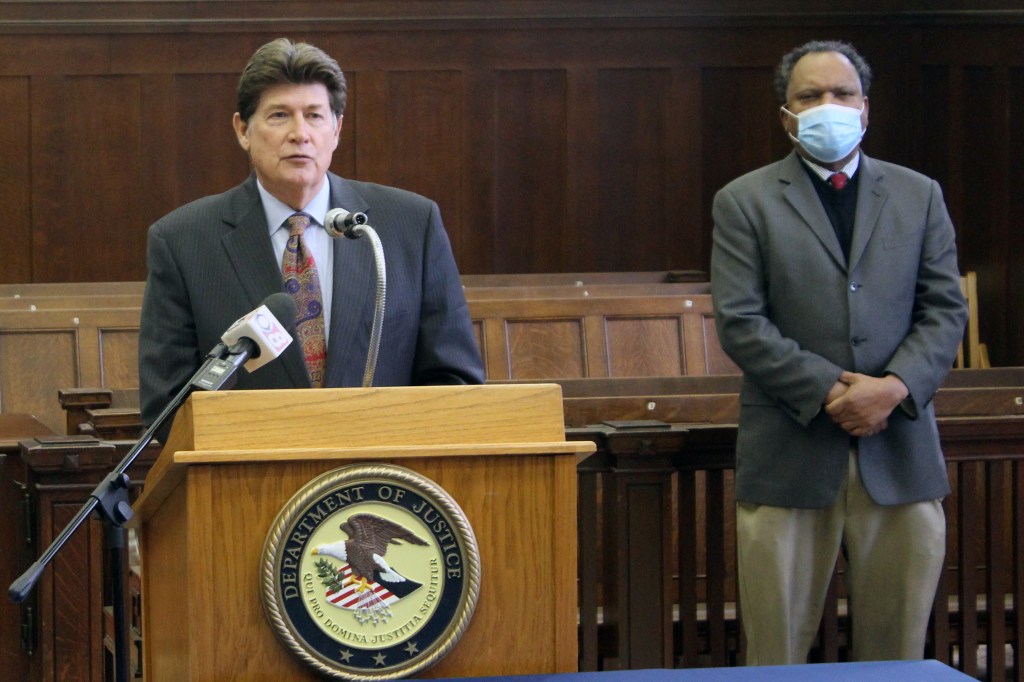 U.S. Attorney Richard Moore announced his retirement from federal service after more than 35 years of service in Selma on Wednesday morning.
“It’s been my great pleasure to be the U.S. Attorney for the Southern District of Alabama since September of 2017,” said Moore. “I wanted to come to Selma one last time to talk about the importance of continuing the work that’s being done by… our local law enforcement partners, our federal partners and the U.S. Attorney’s Office.”
Upon Moore’s retirement, effective Feb. 26, First Assistant U.S. Attorney Donna Barrow Dobbins will become the Acting U.S. Attorney for the Southern District of Alabama.
“I want everyone who hears my voice or reads this in print to know that during the time that I am leading the U.S. Attorney’s Office, the commitment to Selma will remain,” said Dobbins.
Moore’s office has invested heavily in making Selma a safer place over the last several years.
Through Moore’s efforts, a $1 million federal grant – shared between Dallas County District Attorney Michael Jackson, Dallas County Sheriff Mike Granthum and Selma Police Chief Kenta Fulford – was obtained to support the area’s law enforcement.
“Our law enforcement partners came together to in Selma to take the ‘trigger pullers’ off the streets, to buy time to address the systemic social issues in Selma,” said Moore. “I immediately saw that we needed more resources in Selma and we needed a full-time prosecutor from the U.S. Attorney’s Office living in Selma. We persuaded the Department of Justice to create a new, staffed U.S. Attorney’s Office for the first time in Selma.”
Veteran prosecutor Andrew Arrington will serve as assistant U.S. Attorney, manning the local U.S. Attorney’s Office on the third floor of the Federal Courthouse on Alabama Avenue.
“I am extremely happy to have come full circle in my prosecutorial career, back to Selma, the place where I have made my home,” said Arrington. “I intend to be here and to enforce the law and to help this wonderful community.”
Under Moore’s tenure as U.S. Attorney, the “Weed and Seed” program was established to both prosecute, “weed”, violent criminals and foster, “seed”, appropriate programs to address systemic social problems in Selma.
Moore said Wednesday that, through the program, the “worst of the worst” of Selma’s “trigger pullers” have been taken off the streets, but there is still much work to be done.
During Wednesday’s press conference, Jackson, Granthum and Fulford all expressed how instrumental the Weed and Seed program has been in fighting crime in Dallas County.
Jackson thanked Moore for his assistance over the last several years and vowed to continue collaborating closely with the U.S. Attorney’s office to continue putting criminals behind bars.
“We’ve done such a good job around here that some of these gang folks are heading to counties nearby,” said Jackson. “We’re going to stamp them out there too, in Perry and Wilcox and Hale County. We’re going to stamp all these gang members and these gunslingers too. We’re going to run them to Montgomery, y’all.”
While fully funded by the Dallas County Commission, Granthum said that the Weed and Seed Grant went a long way in providing upgrades to the Dallas County Sheriff’s Office (DCSO).
“We don’t have the tax base that a lot of counties have,” said Granthum. “There were some things that we needed. We needed updated equipment, vests, 9-1-1 communications, just to mention a few, and this grant provided us with those things.”
Granthum also attributed assistance from the Weed and Seed grant to a decrease in violence, citing zero murders within the DCSO’s jurisdiction.
Fulford, likewise, cited the resources provided by the grant as a cause of reduced violence within the City of Selma.
“Because of these resources, we have tremendously dropped gun violence,” said Fulford.