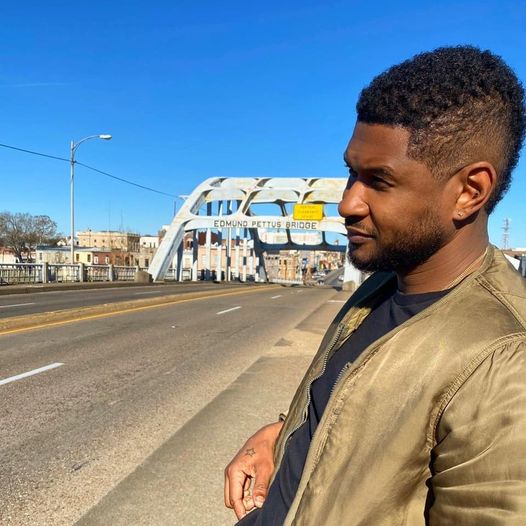 One of the world’s greatest entertainers visited Selma on Monday for Martin Luther King holiday.

Usher Raymond IV, known to his fans worldwide as Usher, took a picture at the front of the Edmund Pettus Bridge shortly after noon Monday.

“I decided to celebrate this day by visiting this historical site, where brave men and women protested for the change we see today,” Usher posted on Facebook. “It’s an honor to be walking in your footsteps here in Selma, Alabama.”
Usher’s post drew over 4,000 comments and more than 5,700 shares on facebook. Several Dallas County residents commented on the post.“Glad you were here,” Selma Quarterback Club Captain Bob Frazer said. “Come back and help bring this great city to life. Our young men need opportunity and purpose.”

“A great entertainer, everybody comes to Selma at least once in their lifetime,” Jackson said.

Usher was born in Dallas, but raised in Chattanooga, Tennessee until he moved to Atlanta.
Usher’s number one hits include ‘U Got it bad’  and ‘U Remind Me.’ As an actor, he portrayed legendary boxer Sugar Ray Leonard in the 2016 movie, “Hands of Stone.”
You Might Like

The Safe Haven Center will celebrate its 20th Anniversary of A Stop the Violence rally in a different way on... read more