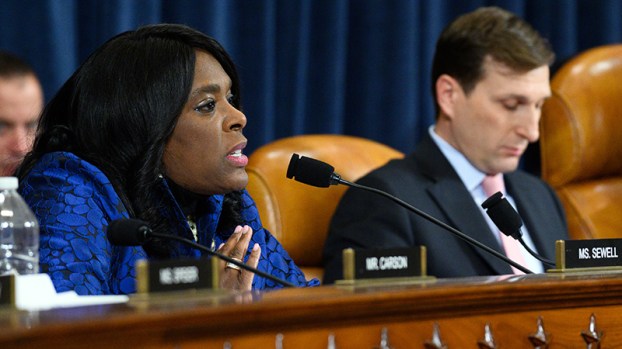 Sewell joins calls for Trump to be removed

U.S. Rep. Terri Sewell, D-AL, who was on hand for the chaotic scene that unfolded at the U.S. Capitol Wednesday, is joining growing calls for U.S. President Donald Trump to be removed from office.

Following the insurrection at the U.S. Capitol Wednesday, in which thousands of supporters of U.S. President Donald Trump breeched police lines and illegally entered the building, occupying offices and forcing lawmakers, staffers and journalists into lockdown, calls are mounting for action to be taken against Trump, who critics have said incited the chaos.

The protest Wednesday coincided with Republican efforts to object to Electoral College votes from several key states Trump lost to President-elect Joe Biden in the November election, which were being certified as the unrest unfolded.

Earlier in the day, Trump had called on supporters to march to the Capitol and “fight like hell.”

Now, House Democrats, led by House Speaker Nancy Pelosi, D-CA, who previously announced her intentions to pursue a second impeachment of Trump if U.S. Vice President Mike Pence does not invoke the 25th Amendment, are looking to hold Trump responsible.

“President Trump is a threat to our democracy and is incapable of carrying out his oath of office,” Sewell said in a tweet Thursday. “There must be consequences for inciting violence and his abject failure to defend the Capitol yesterday. He must be removed from office—either by the 25th Amendment or impeachment.”

Section 4 of the 25th Amendment provided for the Vice President “and a majority of either the principal officers of the executive departments or of such other body as Congress may by law provide” to declare to the House and Senate that the president is unfit to lead and must be removed from office, thereby installing the vice president as his replacement.

With less than two weeks before Biden is inaugurated as president, it is unclear if there is enough time for the House to conduct the hearings that would be necessary for a second impeachment.

Selma-born, Nashville-based singer-songwriter Charlie Argo is celebrating the release of his debut EP, “In the Name of Love,” which will... read more