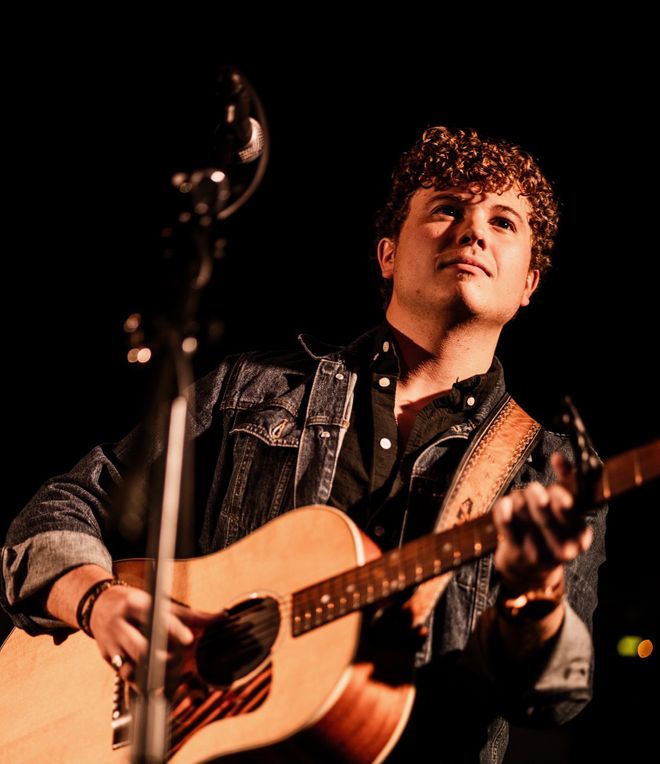 Selma-born, Nashville-based singer-songwriter Charlie Argo is celebrating the release of his debut EP, “In the Name of Love,” which will be released tomorrow.

Written in the aftermath of a breakup Argo went through just before arriving in Nashville, the six tracks on the Jay Tooke-produced EP explore, according to the musician, “whatever love means to the listener,” whether it be reflecting on a failed relationship, losing yourself in a new one or letting the nostalgia you feel for your home town wash over you.

Argo calls his home town Potter’s Station, the rural community just outside of Selma’s city limits, which he reminisces upon during the EP’s fifth track, “Potter’s Station.”

Though he never calls the place by name, Selmians will undoubtedly recognize it through the picture Argo paints with his lyrics.

“It doesn’t really look the same,” said Argo. “But the song talks about going back to those simpler times of my life whenever I was a kid.”

It was in Potter’s Station, as a youngster, that Argo first began flexing his creativity to pass the time: writing songs, poems and creating characters.

“We didn’t have anything growing up but I was always happy,” he said. “It never stopped me from doing anything or made me feel down because we had the love of all the people around us. My family, we were extremely close.”

It’s Argo’s family and their own musical tastes that informed the sound on his EP, his own brand of country music with, as he says, “southern soul”.

“I have a huge background in Southern Gospel Music,” said Argo. “I grew up singing in the children’s choir at Westwood Baptist Church. The Children’s Choir Director there, Miss Cindy Ellis, was a huge influence on me. Not only musically, but she helped me and everyone around me find confidence. When rehearsing for our productions, she would find the kid singing the softest and give them a solo. It shocked you to death, but it had a way of pulling the confidence out of you.”

It was Argo’s mother who took him to church to be baptized in the sounds of Southern Gospel, but weekend visits with his father were where he discovered his affinity for country music.

“Whenever we’d hop in the car he’d have a Conway Twitty box set or George Jones ready to go,” he said.

Finally, it was Argo’s brother, Ben, that most influenced him, musically.

Seven years Argo’s senior, he was enamored by his brother’s guitar and began to teach himself to play.

“We’re best friends now, but we didn’t get along so well then,” said Argo. “But I needed to learn the guitar, so I went and asked him to teach me.”

When Argo learned about the guitar, it was like the primitive people’s discovery of flame.

Argo likened the guitar as the tool he needed to learn to use to channel the creativity swimming around in his head into songs.

Brother Ben also showed Argo how important songs can be in dealing with life’s many obstacles.

“He was a little more introverted than me so he’d sit in his room and listen to music and burn me CDs, back when that was a thing,” said Argo. “Being seven years older than me, he knew what I was about to go through in life and he gave me the songs that got him through those things.”

From there, Argo began to branch out and discover his own musical tastes, immersing himself in the soulful sounds of Muscle Shoals, and Motown.

The influences of the artists that recorded in those storied places are all over “In the Name of Love”, complete with borderline spiritual organ interludes and grooving baselines.

Argo also cites one of Alabama’s own Jason Isbell as another influence, not only for his talents on stage but for his songwriting chops as well.

While there’s many a musician in Nashville perfectly content to build a career performing other people’s songs, Argo himself did so for years playing in a cover band for Tuscaloosa’s bars and fraternities while in college at the University of Alabama, songwriting is important to Argo.

Argo had a hand in writing every song on his debut EP, aside from the single released in September which was written by fellow Alabamian Adam Hood.

When Argo arrived in Nashville, he’d only written one tune, he had already become enamored with the process.

“The gratification I got from that was incredible. It was like a high… From that moment on I knew that was what I wanted to do.”

Argo spent his time writing, picking up lessons from other writers along the way, and eventually put together the songs that make up his EP.

Though the pandemic has created obstacles for all musicians, Argo included, he’ used the time to write even more and has a batch of songs he plans to record in the middle of this year.

“I’m excited to get this EP out and promote, but I’m already looking for the next thing,” he said.

Argo quoted a producer he heard on a podcast recently.

“Does an author sit around and read the book he just wrote? No,” he said. “They start working on the next one.

Argo’s EP, “In the Name of Love” is available for streaming on all major platforms, Friday, Jan. 8. Argo says Vinyl and CDs will be released in the coming months, with a potential limited run at Mark’s Mart’s Tuscaloosa and Selma locations, where Argo spent his high school years working.