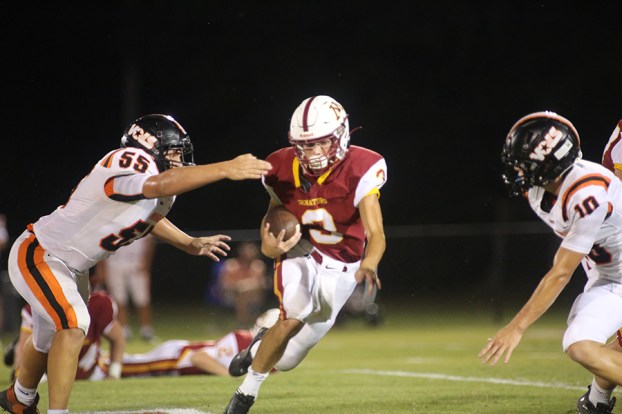 Running back Holt Utsey was the driving force behind Morgan Academy’s run to the AISA State semifinals.

Utsey is The Selma Times-Journal football player of the year. The senior had 2,000 all-purpose yards, scoring 22 touchdowns and seven 2-point conversions. He ran 209 times for 1,656 yards and 19 TDs.

“It’s a big honor,” Utsey said. “I’m proud of everyone who made it possible, my parents, teammates and coaches.”

The eighth-ranked Senators (8-3) went unbeaten at home this season and lost to No. 1 Glenwood Academy 35-6 in the AISA State Semifinals.

“Getting to the semifinals as a senior was great and we knew Glenwood had a good team,” Utsey said. “It was an honor to make it that far.”

Utsey is following his older brothers, Chase and Hardin, to play football at Morgan Academy.

“I played one year with Hardin,” Utsey said. “My goal as a 10th grader was to be as good as Hardin. It was an honor to play with Hardin.”

“Holt is very deserving of being player of the year,” Raines said. “He’s a great kid who put so much into playing football and gave his all on the field.”

Utsey, who also had over 50 total tackles at cornerback, said he was trained to always give a 100 percent effort. “I’ve always been taught and raised to play through pain and never give up,” Utsey said. “I didn’t want to give up on my teammates and I didn’t want them to give up on me.”

Playing for Raines was also enjoyable for Utsey. “Coach Raines was different from Coach Josh Thacker,” Utsey said. “We knew Raines was a good coach. We had to trust him.”

The 5-foot-11 Utsey capped his Morgan Academy football career by earning West MVP honors at the AISA All-Star football game last month. “Being MVP at the All-Star game was awesome and I never expected to receive it,” Utsey said. “Playing in the game was fun.”

Utsey said he wants an opportunity to play college football next year. If a football career doesn’t materialize, he plans to attend the University of Alabama and pursue a Business degree.