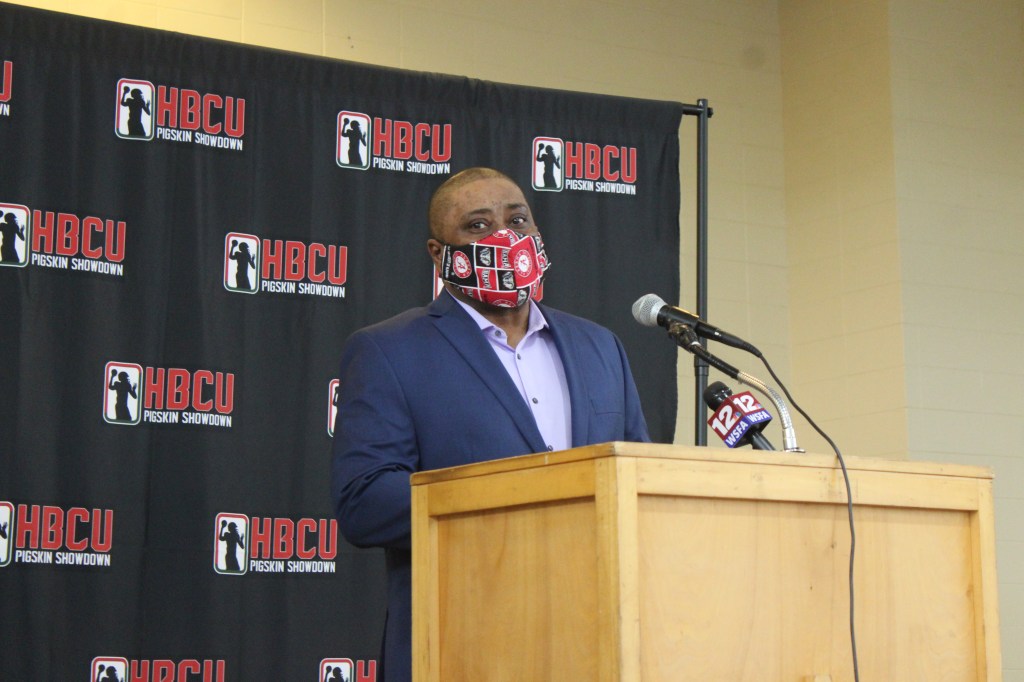 The Selma-Dallas County Chamber of Commerce hosted a press conference Thursday at Selma University announcing the arrival of the Historically Black Colleges and Universities (HBCU) Pigskin Showdown to the Queen City.

The HBCU Pigskin Showdown will be a college football post-season event for standout players from HBCUs who have become NFL draft-eligible as of the conclusion of the 2020-2021 college football season, allowing these players to be seen by professional scouts, coaches and executives.

According to HBCU Pigskin Showdown Co-founders Chris Williams, Executive Director, and Bryant Gordon, Director of operations, there has been a steady decline of HBCU players in the NFL since the 90s.

In 2020, there was only one player from an HBCU chosen in the 2020 NFL Draft, Selma’s own Lachavious Simmons out of Tennessee State, who was chosen in the seventh round of the NFL Draft by the Chicago Bears.

Williams said Thursday he and Gordon wish to build and grow an annual event in Selma, one that benefits not only HBCU football players who wish to make it to the next level, but the City of Selma as well.

“This is not going to be a ‘one and done’,” said Williams. “We are here to build an annual event.”

Selma-Dallas County Chamber of Commerce Executive Director Sheryl Smedley said the event will serve as an economic boost to the city, particularly for the city’s restaurants and lodgings.

The founders of the festival said Thursday that that felt the Queen City would be the perfect place to host the Pigskin Showdown because of its historical significance.

“You don’t realize how much the rest of the world respects you,” said Williams.

The event will not just be one football game, but a week-long event consisting of a youth football camp, college and career fair, networking dinner, unity parade, tailgate party and other events.

Selma University President Eddie Hill cited the even as not only a way to provide an opportunity to help HBCU athletes, but the institutions themselves.

“Football programs bring in a lot of money, and they are important for our Historically Black Colleges and Universities,” he said.

Selma Mayor James Perkins said Selma is “the right place for this event”, but warned the community that “the only way it will be able to take place” is if the community remains vigilant against the spread of COVID-19 by practicing social distancing and wearing face coverings in public.

The date for the HBCU Pigskin Showdown has yet to be determined.