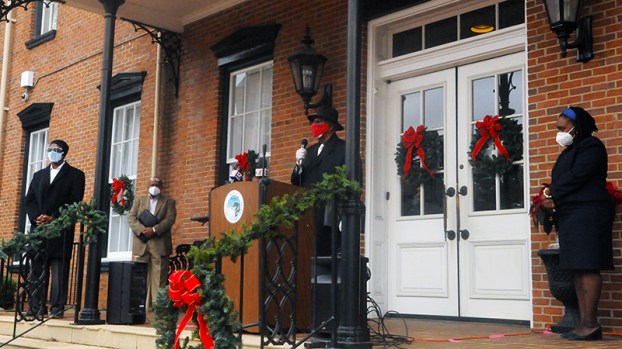 Selma Mayor James Perkins Jr. was joined by state and local officials Thursday for a press conference on the steps of city hall to announce plans to begin “aggressively enforcing” the statewide mask mandate – supplemented by a local order to the same effect – as cases of COVID-19 continue to rise in the county and across Alabama.

According to Perkins, despite “pretty good” compliance with public health orders, Dallas County has seen 108 new cases of COVID-19 per week on average recently.

Rutledge followed Perkins opening remarks and warned that city employees can face disciplinary action, including suspension or termination, for failing to adhere to public health protocols and announced that training for COVID-19 preparedness would begin Thursday afternoon with city department heads.

According to Rutledge, and affirmed by Perkins later, the city’s legal team is currently looking into the legality of issuing citations and other penalties for violation of coronavirus safety measures with an eye toward levying steeper penalties on offenders.

Rutledge also stated that the Alabama Department of Public Health (ADPH) has authority to shutdown restaurants and other food service establishments for not adhering to guidelines, while local law enforcement has the authority to enforce health mandates on non-food establishments – while Rutledge noted that the city does not want to be “heavy handed” in its response, she said the current situation leaves leaders no choice.

According to Maycock, local COVID-19 numbers have increased by 30 percent over their peak in July and local healthcare workers are working diligently despite hospitals nearing capacity and depleted resources.

One after the other the rest of the contingent in attendance took turns voicing support for Perkins ramped up enforcement efforts, which so far have not been fully ironed out – the mayor made no official announcement of new procedures, penalties or plans.

“We are in a life or death situation,” Sanders-Fortier said. “We cannot continue to allow this to happen.”

“This is a time when we should be compassionate and toughtful enough to look out for those around us,” Chestnut said.

“One death of COVID is too many in our county we live in,” Nunn said, referring to the virus as a “deadly beast.”

Only days after the Selma City Council voted to approve a recommendation from Selma Mayor James Perkins Jr. that Selma... read more