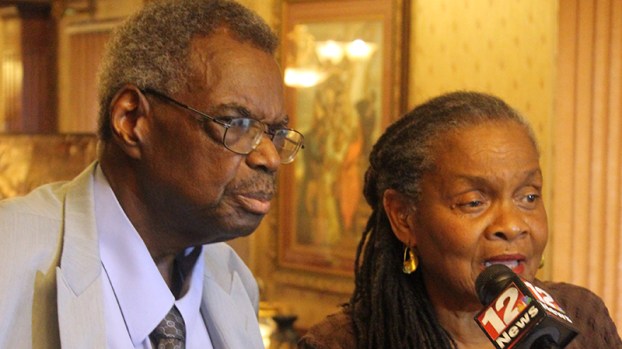 During a virtual awards ceremony and benefit celebration Tuesday night to honor “trailblazers and advocates,” the National Center for Law and Economic Justice (NCLEJ) presented its Leaders in Social Justice Advocacy Awards to “three trailblazers fighting for Black communities in Alabama,” including former Alabama Sen. Hank Sanders, D-Selma, and his wife, activist and attorney Faya Rose Toure, according to a press release form the group.

Professor Emerita of Law at the University of Alabama (UA) School of Law Martha Morgan was recognized alongside Sanders and Toure.

“In the midst of one of the greatest economic crises in U.S. history, we celebrate those leading the charge to end the relentless war on the poor and people of color,” said NCLEJ Executive Director Dennis Parker in the release. “We work hand-in-hand with other advocates for justice for Black and brown communities and people with disabilities by increasing access to benefits, protecting workers’ rights and fighting unlawful debt collection. This work has never been so crucial, so we look to civil rights leaders who have paved the way, like our allies in Alabama, Martha Morgan, Henry Sanders and Faya Rose Toure.”

Sanders, the release from NCLEJ stated, founded in 1971 a law firm “that grew to be the largest Black law firm in Alabama and one of the ten largest in the country” and continues to practice law “to help poor and Black people save their lands, protect people’s constitutional rights and challenge corporate abuse.”

The press release noted that Sanders was one of three lead counsel in the $1.2billion Black Farmers Discrimination Litigation Settlement, which stemmed from cases in 1996 and 1997 asserting that the U.S. Department of Agriculture (USDA) has systematically discriminated against African-American farmers on the basis of race in violation of the Fifth Amendment, the Equal Credit Opportunity Act and more.

Sanders was elected to the Alabama State Senate in 1983, becoming the first Black state senator from Alabama’s Black Belt, where he served for 35 years “championing education, healthcare, tax reform and constitutional reform.”

Toure, the release stated, as a civil rights activist and litigation attorney, “has worked on some of the highest-profile civil rights cases to come before the courts,” including being a member of the legal team that won the Pigford v. Veneman case – one of the cases in the Black farmers settlement.

Toure, who served as a municipal judge from 1973 until 1977, was the first Black woman to serve as a judge in the state and went on to form the National Voting Rights Museum, the McRae Learning Center, the annual Bridge Crossing Jubilee, which has become a nationally-celebrated event widely attended by high-profile politicians, celebrities and others, the Black Belt Arts and Cultural Center and more.

Currently, Sanders and Toure, along with co-honoree Morgan, are serving as lead and co-counsel respectively on the McCullough v. City of Montgomery case, debtors’ prison litigation against the city and private probation company Judicial Corrections Services.

“This award is very symbolic,” Sanders said. “It’s symbolic because of the struggles that so many people have to try to get justice. And so few people are struggling to try to help bring about that justice. So, it’s important for that reason most of all. It’s also important that it’s an award that I am receiving with my wife, Faya Rose Toure, for all of her work in this regard. And it’s important that I’m receiving this award along with law professor emerita Martha Morgan for all of her work. So, some awards mean more than others, this one means a lot. I’m proud that some of the work that we have done is being recognized by others and I hope that it will spur others on to fight for justice.”

Gospel Tabernacle Church and Sonlight Outreach teamed up to give away food boxes under cold rain and heavy wind Friday... read more