A breath of fresh air

Blanketed in sunshine, a crisp breeze nipping at the back of my neck and ears and a wide smile streaking across my face, I practically danced my way to the makeshift press room established at Bloch Park Friday, where Selma Mayor James Perkins Jr. held a press conference to update the public on a wide variety of topics.

While the details of the event, reported on elsewhere in today’s edition, were important, the fact is that Perkins could have stepped behind the podium and read a few lines from “Green Eggs and Ham” and warranted wide applause from this newsman.

Why? Because the city’s top leader going before the public, speaking honestly and openly, standing before their opened eyes in real time, discussing the reality of the situation on the ground here in Selma, trotting out ideas and plans and procedures, is something as foreign to this land as the modern car would have been to the prehistoric humans of the Paleolithic Era.

While it’s not my intention to keep jabbing Perkins’ predecessor, who has been at the receiving end of my outrage for two years now, the fact remains that public appearances by the city’s chief executive were a rarity under former Selma Mayor Darrio Melton – the first and only time I ever saw him speak publicly was during his “State of the City” address in 2019, which he used to slam the local press for “destroying the image of our city” – and open communication with the local press and citizens was wholly absent.

During his press conference, Perkins discussed a wide range of issues – ongoing COVID-19 and Hurricane Zeta recovery efforts, the upcoming budget process, grant awards and more – representing the first time the city has heard from its mayor in a way that didn’t include finger-pointing, thinly-veiled threats and distortions in quite some time.

And Perkins only officially assumed the office Tuesday – that he went before the public so quickly speaks volumes, hopefully, for the type of transparency and honesty we can expect to see over the next four years.

There is no doubt that the people of this city have suffered over the last few years, not least from being left in the dark about how the city was making decisions, utilizing resources, building relationships, advancing opportunities and the like, and the simple act of a leader speaking to the people about their city can pay immense dividends in terms of morale and cohesion.

Indeed, how can a people feel that an elected representative actually comprehends and appreciates their concerns and struggles from behind a code-locked door in city hall? A leader, as Craig Field Director Jim Corrigan so eloquently stated during his remarks at the graduation ceremony for Leadership Selma-Dallas County Thursday afternoon, must be among the people regularly to both understand their plight and light the way ahead.

“How do you make decisions if you don’t know about the operation and how it works?” Corrigan said during the ceremony Thursday – Perkins first outing before the public as this city’s mayor shows a leader trying to understand the situation and shine a light on the path ahead, not to mention one simply being visible and accessible to the people who for so long have been neglected by their top official.

With any luck, this first press conference is the start of what will be a four-year-long habit for Perkins – going before the people, openly, to discuss the issues ahead and lay out a plan for how they might be addressed – and we can finally cast aside the conspiracy, secrecy and apathy that has defined the last four years. 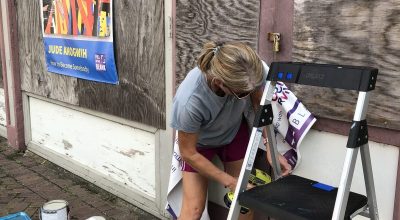 Bearing witness and baring the wounds