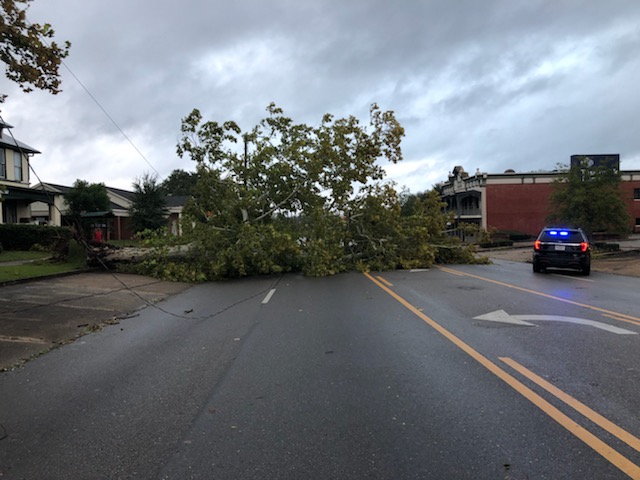 People across Alabama are waking up to dark homes and debris-littered streets Thursday following Hurricane Zeta’s attack on the state Wednesday night.

In Selma, residents began losing power around the 10 p.m. Wednesday night with roughly 20,000 citizens across Dallas County reported without power in a 7 a.m. report from Alabama Power.

The report stated that 494,000 customers were without power Thursday morning, 130,000 in Central Alabama.

Across the region, residents saw the following outages:

By 11 a.m., Alabama Power was reporting that nearly 117,000 customers were still without power In the region, though power had been restored to more than 14,000 customers.

In Dallas County, the number of people without power as of 11 a.m. was at 19,600, a decrease of 400 over numbers reported earlier in the morning.

Surrounding counties saw the following progress on power restoration as of the midday report:

• Montgomery County – 20,000 customers
• Tallapoosa County – 16,000 customers
• Chilton County – 14,000 customers
• Elmore County – 12,000 customers
• Autauga County – 11,900 customers
• Wilcox County – 5,400 customers
• Lee County – 4,500 customers
• Lowndes County – 3,800 customers
• Perry County – 2,200 customers
• Butler County – 1,000 customers
As of 4 p.m., the company had not provided an update on restoration efforts in the area.
The Dallas Count Courthouse closed for the day and all schools in both the Selma City and Dallas County school systems were shuttered.
Downed trees could be found throughout the area, including one stretched across Broad Street.
The Selma City Council announced plans for an emergency meeting in order to disperse funds needed for debris removal on various public properties.
State agencies began sending out notices early Thursday morning, with the Alabama Department of Transportation (ALDOT) warning drivers to stay off of roads and highways.
The Alabama Department of Labor (ADOL) announces that in-person unemployment claim assistance would be canceled for the day, as the site in Montgomery was without power.
The Alabama Department of Public Health (ADPH) issued a statement reminding citizens “to follow health and safety precautions as many areas of the state experience flooding, toppled trees and power outages and Alabamians work to clear storm damage resulting from Tropical Storm Zeta.”
The ADPH story noted that, despite the devastation, Alabamians must continue to observe COVID-19 precautions, as well as be mindful of other threats that arise following natural disasters, such as carbon monoxide, chain saw injuries, septic tank issues and more.
LifeSouth issued a statement claiming a “desperate need” for blood donations in the wake of the hurricane, especially considering the damage done to donation levels due to the coronavirus crisis.
“In the wake of Hurricane Zeta, which crossed over Alabama’s coast then moved into the state of Georgia, millions are without power causing blood drives at businesses and schools to cancel,” the LifeSouth press release stated. “The community blood supply continues to be dangerously low due to the impact of COVID-19 and prior storms…LifeSouth officials report that Zeta could not have come at a worse time, as there is a national
shortage of blood and the storm has impacted much-needed blood drives.”
STJ News Editor James Jones and Staff Writer Brannon Cahela contributed to this report.