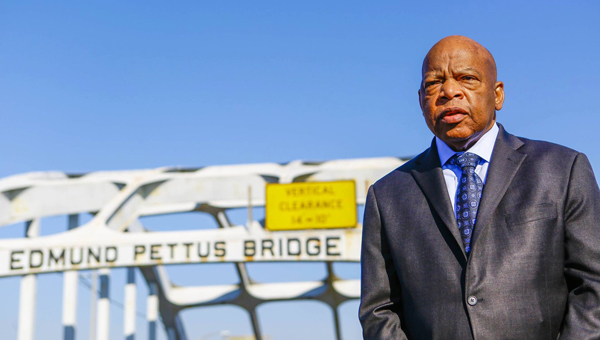 Congressman John Lewis returns to Selma 50 years to the day after leading the Bloody Sunday march with the late Rev. Hosea Williams.

The Alabama NAACP, in partnership with the Economic National Underprivileged Foundation (ENUF) will commemorate “the life and legacy of the late Congressman John Lewis” with a caravan and last words reading Saturday afternoon, according to a press release from the group.

“The late Congressman John Lewis was met with brute force while trying to lead some 600 protesters across the Edmund Pettus Bridge in a peaceful protest for voting rights on March 7, 1965,” said Alabama State NAACP President Benard Simelton. “The televised images of the bravery shown by John Lewis and others in the face of state violence inspired the passage of the 1965 Voting Rights Act two months later. We remain committed to keeping his legacy alive as we rally peacefully and read his last words, [which] we consider a charge and call to action.”

Those taking part in the event will gather at the foot of the Edmund Pettus Bridge and depart at 1 p.m. for the Alabama State Capitol in Montgomery, where Lewis’ final words will be read and a slew of speaker will address those gathered.

Among the speakers slated to orate from the capitol steps Saturday is Alabama Rep. Prince Chestnut, D-Selma, who recently won the organization’s prestigious Legislator of the Year Award, following in the footsteps of Selma native U.S. Rep. Terri Sewell, D-AL.

Chestnut said the event will include a number of activities taking place along the way and his remarks in Montgomery, less than two weeks before voters go to the polls in a presidential election, will center around the importance of voting and the Voting Rights Act, as well as the contribution made by Lewis and “the work of others who toiled so that we can have the right to vote and choose our political leaders.”

“I appreciate that the NAACP reached out to me and requested that I be a part of this event,” Chestnut said. “I am inspired to continue my work as a leader for the people of the State of Alabama.”

Face masks will be required for all participants, who are invited to join the caravan at either location – the start at the foot of the bridge or the conclusion at the capitol steps – and organizers will provide masks to those who do not have one.

Social distancing guidelines will also be observed during the event.