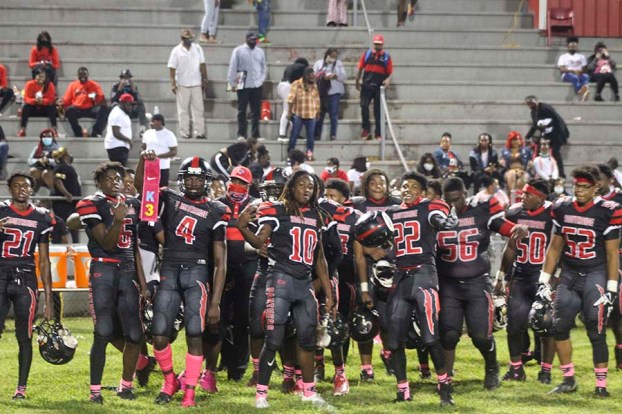 Selma High plays in the biggest game of its football history. The Saints (6-2, 5-0) travel to unbeaten Demopolis for the Region 4, Class 5A championship. Selma High has never won a Region championship since the AHSSA introduced Regional play.

JeVonte Stubbs and Dion Nelson remain the scoring leaders for the Saints, combining for over 35 touchdowns this season. “A win would be huge for the not only the team but for the entire city, winning a Region Championship has never been done so no doubt this will be big for our team.,” Saints coach Willie Gandy said.

“Demopolis is a very good football team. Always have been one of the top teams in the state that are always in the playoffs. A team that has great tradition, a well coached football team that plays lights out on defense.”

Southside at Thomasville: The Panthers (5-3, 2-3) must beat Thomasville to clinch a final playoff berth in Region 6, Class  3A .

“They are a great team, very physical, we have to be ready for the challenge and match their physicality,” Panthers coach Charles Moody said.

Keith at J.F. Shields: The Bears (5-1, 4-1) return to action after three weeks that includes a forfeit victory. The Bears can clinch a home first-round Class 1A playoff game with a win on the road. “It’s a goal of ours to win the Area or land in the second spot,” Bears coach Anthony Lumpkin said. “It will be great if we accomplish that.”

Dallas County at Montevallo: Dallas County needs a win to clinch a Class 4A state playoff berth.The Hornets will be a third or fourth seed.

Quarterback Josh Brown, linebacker Markeice Stallworth and wide receiver Carlton Underwood Jr. have led the Hornets (3-5, 3-3).  “Montevallo has a great running back that is tough to bring down,” Hornets coach Heath LeVert said. “We will have to play soundly on offense to be successful. We are one win from the playoffs. This game is huge.”

Fort Dale Academy at Morgan Academy: The Senators (6-2, 3-1) tuneup for a bye week and hosting a first-round playoff contest on Nov. 6 at Morgan Stadium.

Meadowview Christian School at Pickens Academy: MCS (0-9) closes its season on the road.