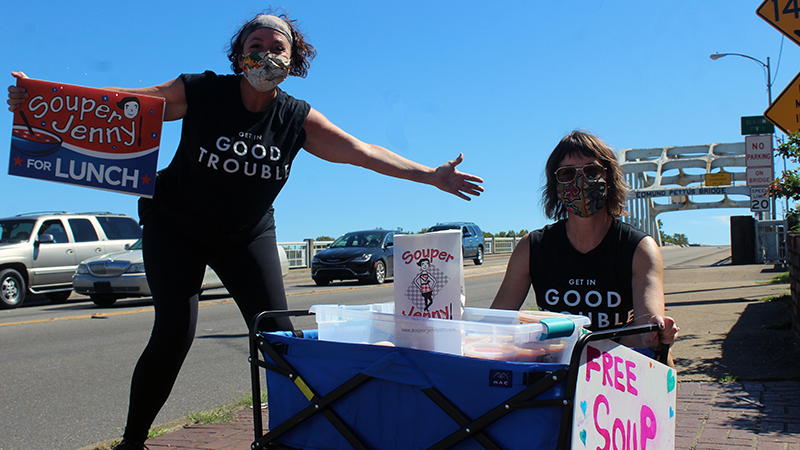 Jenny Levison, known as Atlanta’s “Queen of Soup” and owner of five Souper Jenny restaurants in the city, touched down in Selma Wednesday alongside friend Meg Gillentine for the first day of their Souper Jenny Kindness Tour.

Levison said the idea for the tour sprang out of a desire to do something positive as the country reels from a global pandemic, civil unrest over police brutality and the divisiveness created by the impending election.

“I just think the world is in a tough moment right now,” Levison said. “We were just looking to do some good.”

“Spread a little love, one owl of soup at a time, and hope others will do the same,” added Gillentine.

During the course of their tour, which will find the duo in New Orleans later this week, Levison and Gillentine are visiting local farms to stock up on fresh, local produce, which is then used to craft a unique soup to be distributed to folks in need across the various communities they visit.

While the pair noted that handing out soup was the centerpiece of their tour, Gillentine added that supporting local farms, which have seen revenues tumble as a result of the pandemic, is another important aspect of their work.

“They need support too right now,” Gillentine said. “We are out to find the local farms and support them.”

Before arriving in Selma, Levison and Gillentine stopped off at Joy Haven Farm in Shorter to prepare Levison’s famous turkey chili to be distributed in the Queen City.

After stopping in New Orleans for two nights, where they hope to hand out soup across the city’s 9th Ward, Levison and Gillentine will trek to Lake Charles, Louisiana and then on to Austin, Texas before heading out to California; from there, the duo will return to Atlanta and travel north from there.