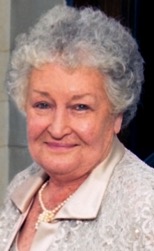 Dorothy Anne Helm Brown, 90, of Selma passed away peacefully in her sleep on September 16, 2020 at her home after a long illness.