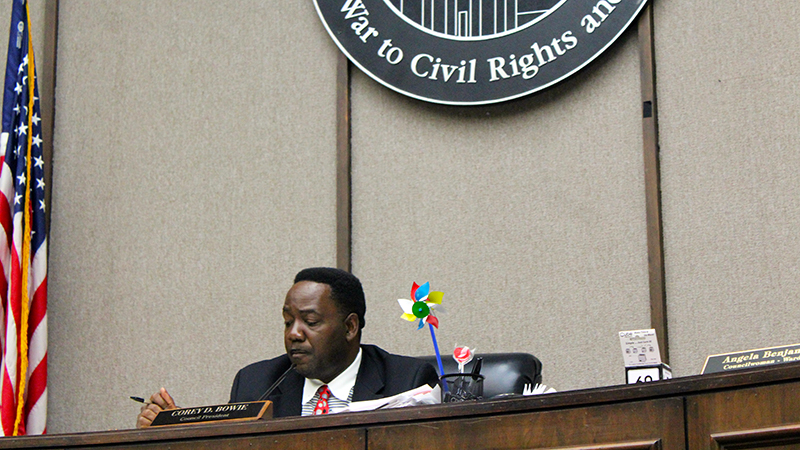 The Selma City Council convened at Selma City Hall Tuesday for its first in-person regular meeting since the COVID-19 pandemic put a halt to most public gatherings earlier this year.

Among the actions taken during Tuesday’s meeting was the approval of a $1.2 million grant from the Federal Emergency Management Agency (FEMA), which requires a maximum 12.5 percent match locally, to repair five streets in the city.

According to Selma City Council President Corey Bowie, the five locations were chosen following an assessment conducted by FEMA and others.

Work is slated to repair the sinkhole near Urgent Care on Highland Avenue and to repair spots along Marie Foster Street and L.L. Anderson Avenue.

The grant will also cover work on West Haven Drive, around Arsenal Place and patch the sinkhole at Riverfront Park.

“When we talk about infrastructure, this is part of the plan,” Bowie said. “This grant is going to help with some of the roadways that have been impacting drivers. We’re trying to address infrastructure and this is just the first phase.”

The council also moved forward with a plan to remove trees along Broad Street, between city hall and the Edmund Pettus Bridge, following a request from Mandy Henry.

According to Bowie, the roughly $4,000 needed to clear the trees will come from the city’s tourism and community development accounts.

“Downtown is a major tourism area,” Bowie said. “What we’re trying to do is clean up the downtown area to continue to promote tourism in the city.”

“I think it’s a great idea,” Bowie said. “It brings back that Christmas spirit to downtown, with the lights and everything, and the council voted unanimously to let them do that.”