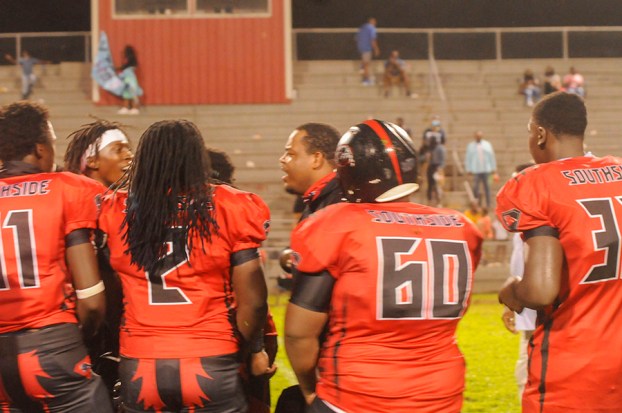 Southside charges back for rare victory over Selma

Southside pulled off one of its biggest football wins in school history.

The Panthers have only beaten Selma seven times in 37 tries.

“It was a great game, we fought against adversity and never gave up,” Moody said. “I’m proud of them.”

Panther Stadium was full on both sides and at the fence despite fans being six foot distance and wearing masks.

The Saints had a chance to win in the final 45 seconds, reaching the Panthers’ 35-yard line. Samuel Taylor deflected a pass on fourth and six to seal the game for Southside.

The Southside cheerleaders and players raced onto the field for a celebratory victory.

The Saints stormed back to grab a 16-8 halftime lead. Rodrick Ward on a 2-yard TD run and hit Dion Nelson for a 2-point conversion to tie the game.

Williams’ 1-yard TD run brought the Panthers within 16-14 after one quarter.

The Saints grabbed their final lead on Sherwood Martin’s 3-yard TD run and 2-point conversion run with under 5 minutes left.

Saints coach Will Gandy made no excuses after the game.

“Southside played a helluva ball game and didn’t quit,” Gandy said. “The season is not over for us.”

Both teams had plenty of chances to score, but turned the ball over on downs in the first half.

Thomas finished with over 200 yards passing. Williams scored three touchdowns to lead the Panthers, who hosts Greensboro next Friday.

Selma High travels to Marbury in a game that was moved because Gandy said that Memorial Stadium isn’t ready to play in.