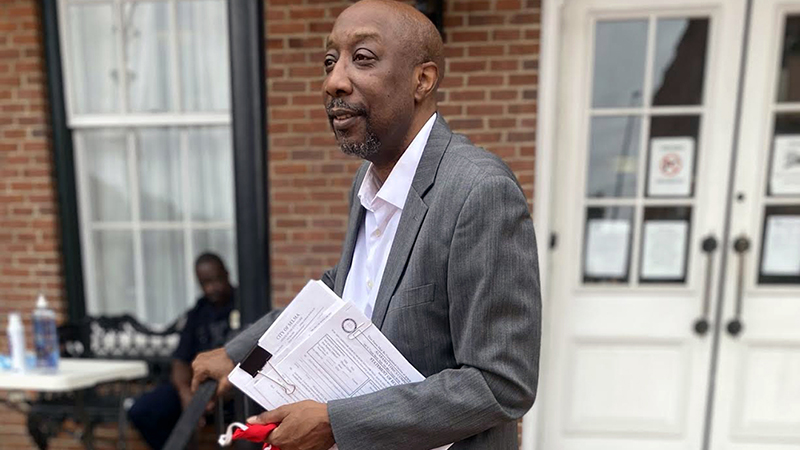 Rev. Wil Jackson, pastor at Summer Grove Baptist Church and currently a candidate for Selma City Council president, issued a “Safe Distance for Selma” pledge for his campaign, promising to practice social distancing during the last two weeks of the campaign in response to the growing COVID-19 crisis.

“In looking at the latest developments in the coronavirus, we’ve had an increase in our cases…in Selma and Dallas County,” Jackson said. “I always want to keep our citizens in Selma safe. This is a different time we’re living in and we need leadership that’s going to look out for our citizens, even during the campaign.”

Additionally, Jackson has called on all of the other candidates for council president – 100 Black Men of Selma President Billy Young, Selma AIR’s Lydia Chatmon, Kimesha Alvarado and incumbent Selma City Council President Corey Bowie – to sign on to the pledge.

So far, none of have taken up the pledge, which was issued Monday morning, but Jackson is optimistic that most will sign on.

“We need leadership like that in city hall to make sure that, in times of crisis, we have leaders that are thinking ahead and thinking outside the box,” Jackson said. “Door-to-door canvassing, face-to-face canvassing, is really not a safe practice at this time.”

According to Jackson, safety has been a hallmark of his work long before setting his eyes on the council president’s seat.

“I chaired the Dallas County Water and Sewer Authority Board for six years,” Jackson said in a press release. “During my tenure, I never made a decision that put Selma residents in harm’s way.”

The same mantra has applied to his work as a pastor.

“As pastor of Summer Grove Baptist Church, we take every precaution to maintain social distancing and safety each and every Sunday,” Jackson said. “This is a very serious virus…we don’t want to put any of our members at risk, even during our church services.”

According to the Alabama Department of Public Health (ADPH), 320 people in Dallas County have been infected with the disease, which has struck nearly 99,400 people across the state and resulted in more than 1,730 deaths.

Jackson noted that the discussion around in-person campaign, as well as large campaign events, ebbed into the national spotlight following the death of Herman Cain, a former Republican presidential candidate and co-chairman of the group Black Voices for Trump, due to coronavirus-related complications following his appearance at a campaign rally for U.S. President Donald Trump.

Cain, like most of those in attendance at the rally, was seen not wearing a mask and not following Centers for Disease Control and Prevention (CDC) guidelines pertaining to social distancing.

While Republicans have largely flouted virus precautions, Democrats have largely “vowed to use digital organizing and social distance strategies to deliver their campaign messages to voters safely and responsibly,” the press release from Jackson’s campaign stated.

In his pledge, Jackson specifically promised to refrain from holding large, in-person gatherings, to wear a mask and maintain a safe social distance at all events he attends, to avoid door-to-door campaigning – his campaign will instead perform literature drop-offs – and to encourage all staff, volunteers and supporters to uphold the pledge when campaigning on his behalf.

“We need to hit the reset button,” Jackson said in the release. “Selma needs leaders who understand that this pandemic can and will destroy our economy if this virus gets out of hand. I have a plan to revive our economy and I have a plan to keep voters safe during this campaign. This is the type of leadership I will bring to the office of council president.”