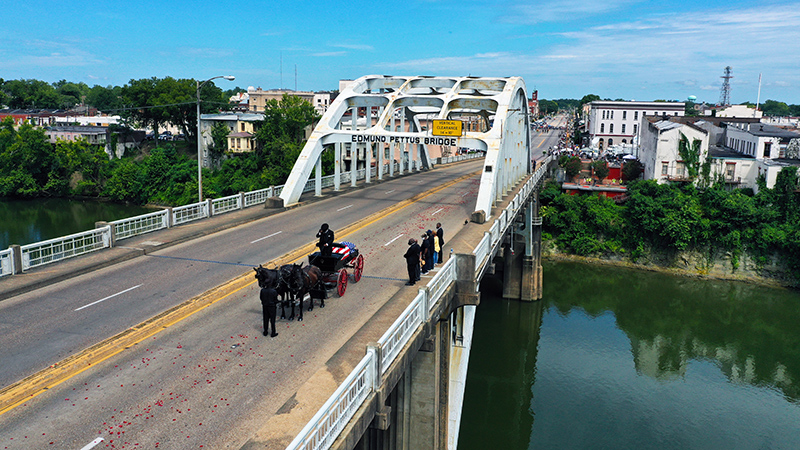 The sun exploded from behind a wall of clouds just moments before the body of John Lewis, the civil rights icon beaten in Selma on Bloody Sunday who went on to represent Georgia in the U.S. House of Representatives for more than 30 years, rounded the corner onto Broad Street and approached the Edmund Pettus Bridge for one last crossing Sunday.

Scores of spectators sang and shouted as the horse-drawn carriage hauling Lewis’s flag-draped casket slowly made its way to the bridge. 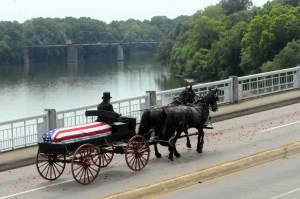 Cries of “Good trouble” and “Thank you, John” could be heard, as well as a chorus of “This Little Light of Mine.”

The “Celebration of Life” ceremonies for “The Boy from Troy” began Saturday morning in Lewis’s hometown, where Troy University hosted events remembering his legacy.

That evening, ceremonies were held at Brown Chapel AME Church to honor the fallen civil rights leader ahead of his final trip across the Edmund Pettus Bridge Sunday morning.

Historic Brown Chapel AME Church held a brief ceremony Sunday before Lewis’s body crossed the Edmund Pettus Bridge. The family gathered at the church at the place where Lewis and Dr. Martin Luther King Jr. set the foundation for the 1965 Voting Rights push.

Tabernacle Baptist Pastor Otis Culliver delivered a passionate prayer, offering condolences to Lewis’s family and thanking him for his contribution to Civil Rights.

“When I got the news of John’s passing, my heart broke, but my spirit soared,” Sewell said. “It’s rare in life that you get to meet and be around your hero. “John and I had a special bond through Congress and Selma. He was the boy from Troy and I was the girl from Selma.” 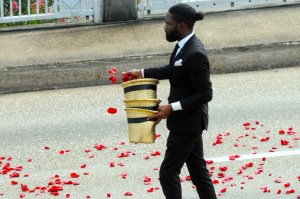 As that was happening, rose petals were being spread over the bridge along the path the Lewis’s body would travel on its way to lie in state at the Alabama State Capitol, then onward to Washington, D.C. before reaching its final destination in Atlanta.

Among those lining the streets of Selma to offer fond farewells to Lewis was the Selma City Council.

“The pillar that changed the nation, Congressman John Lewis, returned to the site where he took a beating for justice, equality and democracy,” said Selma City Council President Corey Bowie. “I want to personally thank Congressman Lewis for his sacrifices for a better nation.”

Selma City Councilwoman Angela Benjamin admitted to getting teary eyed as Lewis’s body approached the bridge for the final time.

“A giant has exited stage left,” Benjamin said. “An icon has mastered true freedom. This man, I will miss; his stories, I will pass on.”

“The long road of justice and equality arches across the Edmund Pettus Bridge,” said Selma City Councilwoman Miah Jackson, currently a mayoral candidate. “Approximately 55 years ago, U.S. Rep. Lewis heroically began his walk, his life purpose, to bridge our country’s sinful and oppressive past to a hopeful future. U.S. Rep. Lewis was a living example of perseverance, integrity, compassion and resilience. His wisdom and resolute character shall be missed.”

The carriage driver stopped at the foot of the bridge, standing solemnly as the gathered crowd heaped its adoring words upon the congressman for the final time, before crossing the bridge where members of Lewis’s family were waiting to accompany the procession to Montgomery.