TKO hands out supplies to those in need 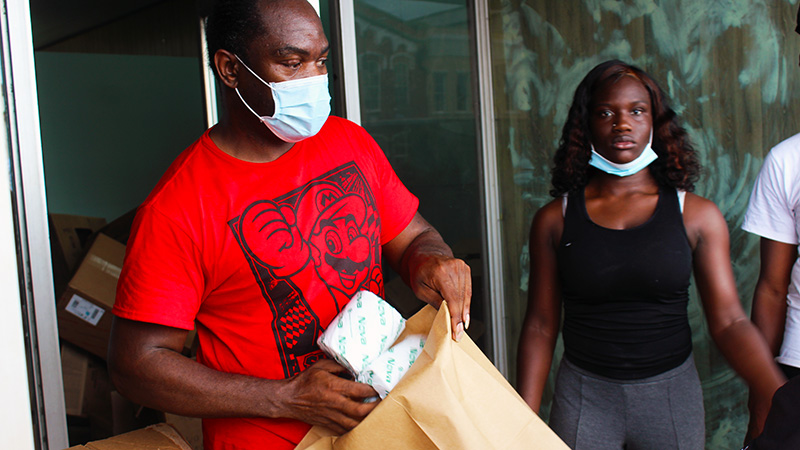 People stood sweating in a long line stretching from a nondescript store front on Broad Street to the parking spaces nearby Thursday as volunteers with The Knights and Orchids (TKO) Society distributed grocery bags filled with a variety of household items and supplies.

TKO is an organization committed to empowering and serving the needs of the LGBTQ community, particularly African Americans living in rural parts of the state, that has been working throughout the COVID-19 pandemic to provide people in need with access to hand sanitizer, cleaning supplies, masks, diapers, Plan B and more.

According to TKO Financial Director and Selma Center Manager Jennine Bell, the group began handing out the bags of supplies, purchased through a partnership with Yellowhammer Fund, a reproductive justice organization, early in the pandemic, though the organization took a month off to restock.

Though the organization generally focuses on the LGBTQ community, Bell said the bags of supplies were being distributed to anyone in need.

On Thursday, six volunteers were on hand to help out with the organization’s effort and some 380 bags of school supplies, as well as 100 bags of cleaning supplies, were distributed between 11 a.m. and roughly 1:30 p.m.

According to Bell, the local wing of the organization serves roughly seven counties, most of which are in the Black Belt.

According to the organization’s website, www.tkosociety.com, more than 77,800 pounds of food have been distributed to 980 beneficiaries since 2019 and more than $50,000 has been collected for the group’s building fund, which has a goal of $75,000.