Kynadra Lewis uses basketball to get her point across 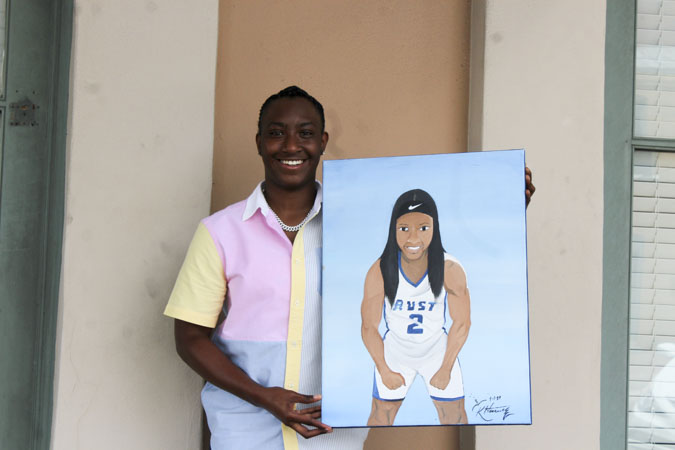 Kynadra Lewis’ journey to basketball stardom is a testament to her strong work ethic and determination.

The point guard successfully translated those skills from Selma High School to Coastal Alabama Community College South. Lewis plans to make a smooth transition next year at Rust College, where she recently signed a scholarship. Rust College, located in Holly Springs, Mississippi, is a Historically Black College University (HCBU) and plays on the NAIA level.

Lewis will play for a familiar face in Lady Bearcats coach Eric Jackson Jr. at Rust College. Their paths first crossed a decade ago when Lewis played at R.B. Hudson Middle School and Jackson coached at Concordia College.

“I feel honored that coach Jackson realized I had potential way back in middle school,” Lewis said. “Coach Jackson tried to get me to play at Rust College before, but he didn’t want me to pay my own way.”

Jackson said he recognized Lewis’ potential as a seventh-grader on a talent-laden R.B. Hudson squad.

“R.B. Hudson had a really good team and Kay Kay was their best player,” Jackson said. “She’s a great athlete who respected the game and played hard.”

Lekeita Lewis, Lewis’ mother, said she’s not surprised at her daughter’s success on and off the court and will always be there to support.

“I’m very proud, I’m her number one fan and supporter,” Lekeita Lewis said.  “I’ll be right behind her screaming, you got this.  I tell her all the time, let God direct your path and you will go a long way.”

Under former Lady Saints coach Anthony Harris, Lewis positioned herself to earn a college scholarship. Lewis averaged 14.3 points and 4.6 assists a game as a senior and earned a spot on The Selma Times-Journal All-Dallas County girls’ basketball team. She also finished as a Top 20 Senior and graduated with a 3.8 GPA.

Lewis said she embraced Harris’ motto: “only the strong survive,” during her entire career as a Lady Saint.

“It was very intense playing for Coach Harris,” Lewis said. “He taught me how to deal with being under pressure. I was an attacker on both offense and defense at Selma High. I was a take it to the basket player.”

Harris said Lewis arrived on the scene as an eighth-grader, but decided to play her until she officially entered high school as a freshman.

“Kay Kay is a Selma jewel,” Harris said. “The first year Kay Kay played for me, I yelled at her and said, ‘don’t look for your momma, just run my system.’ Kids always look to their momma whenever a coach yells at them. I told Kay Kay, ‘your momma can’t help you, you must help yourself.’

Harris said Lewis eventually evolved into a leader and stellar all-around player over those four seasons.

“After that first year, Kay Kay took the point guard position and ran with it,” Harris said. “She’s always been a playmaker. I told Kay Kay the only way she will get better is staying in the gym and working out. A lot of players just rely on their talent. Kay Kay’s a gym rat and loves to work out.”

“Nikki told me about Kay Kay and said she ‘was a workhorse,” Pitts said. “I had to go see her for myself. It was true: she’s a hard worker.”

At Coastal Alabama South, Lewis averaged 14 points, four assists and four rebounds in each of her two seasons. She finished with a 3.2 GPA and earned an Associate Degree in Health Science.

The 5-foot-5 Lewis said Coastal Alabama South provided the opportunity for her to develop other aspects.

“Playing at Coastal Alabama South helped me mentally and helped my leadership skills,” Lewis said. “I also learned how to patient and stay humble. I learned how to take more control of the game, knowing when to slow it down and when to speed it up.”

“Kay Kay’s a tremendous athlete, very durable and never missed a game for us,” Pitts said. “She always wanted the ball in her hands. She’s mentally tough and a hard worker. Kay Kay’s a sweet girl and great kid. She always went to class. We’re so proud of her.”

“Kay Kay has gotten bigger and stronger, her jump shot has improved over the years,” Jackson said. “She’s learned how to overcome adversity. That’s important as a point guard because the point guard leads the team.”

At Rust College, Lewis will major in Health Science with a goal to become a Physical Therapist someday. Lewis is looking forward to the next chapter in her life.