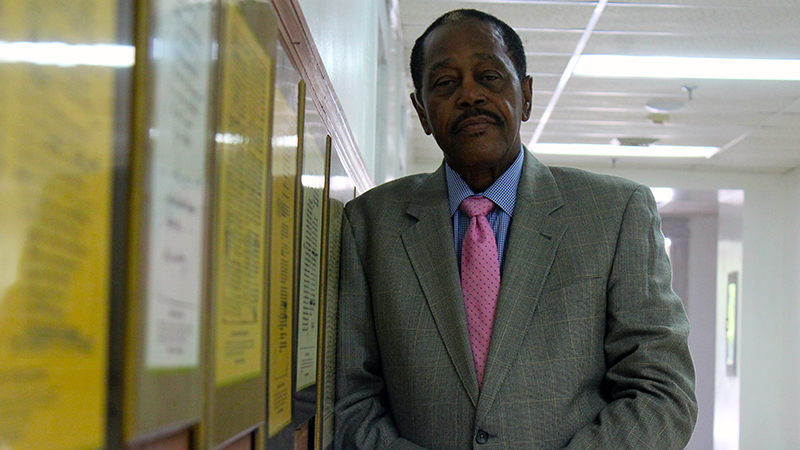 The halls of Selma University’s main office building already show the signs of progress – painter’s tape lines the walls, which are already coated in the first layer of white paint, and planks of fresh wood and half-used paint buckets line the floors – as Eddie Hill, who took the post as the university’s president last week, walks the well-lit corridors atop blue sneakers.

Hill takes the post as the university struggles to regain financial solvency following a $785,000 debt to the U.S. Department of Education related to inadequate paperwork and incomplete files submitted in relation to the Federal Student Financial Assistance Program.

That’s a task Hill is uniquely qualified for, as he spent his years with the Alabama State Department of Education (ALSDE) venturing into financially-strapped school districts and assisting them in becoming financially sound.

“I took this job to help this school and make sure we get educationally and financially sound,” Hill said. “Selma University has a history of being a good school and we’re going to add to it. We have a lot to do.”

Hill has already taken his first steps to securing the school’s financial viability by establishing a financial advisory committee tasked with working across the city to secure endowments for the school.

“We’re not asking for donations, but endowments,” Hill said, noting that recurring contributions to the school will make it feasible to draft a solid operating budget for the university. “If the committee does what they say they are going to do, we’re going to clean up that debt.”

Beyond the financial tasks ahead, Hill hopes to see the school gain education accreditation to accompany the accreditation in divinity it already holds.

“We’re accredited in divinity, but we want to be accredited for education as well,” Hill said, noting that such accreditation would pay large dividends for the city and the state. “If we can have that with divinity, we can offer more and recruit more, but we have to make sure we’re academically sound. If we can offer that to them, they can give something back to this state we live in.”

Hill imagines a situation where recruiters for the school can be found all around.

“We’re going to change it around so everyone can be a recruiter,” Hill said. “The benefit of that is that they’re going to be a benefit to the City of Selma.”

Hill’s bona fides as an educational leader extend beyond the ALSDE – over the years, Hill has coached high school and college football, worked as a principal in Daleville and eventually became the first black superintendent of a majority-white school district in the state when he led Daleville’s school system.

Leaning on his passion for athletics, Hill is already envisioning the return of basketball to Selma University.

“I think we’ve got a good chance to get it back,” Hill said.

As far as the aesthetic efforts already underway at the school, Hill envisions a campus that has come to life with color and activity – he’s already imaging the bulldog prints that will line the hallways and the streaks of blue that will dash across brightly-whitened walls.

More than anything, however, Hill has his sights on seeing Selma University return to its rightful place as a leader in the community, as well as a contributor to the community.

“Selma University is part of Selma,” Hill said. “I want this university to be an integral part of this community.”

The university is housed in Ward 6 and Selma City Councilwoman Jannie Thomas, who represent s the area and has lived there all her life, is enthused about Hill’s arrival.

“This university means a lot to this area,” Thomas said. “For many years, this college has played a big role, it’s part of our history. We don’t need the doors closed, we need to revitalize this college, and I appreciate Mr. Hill coming to save it.”

For his part, Hill is confident that the mountain ahead can be summited with the community’s support.

“We’re going to make this thing work,” Hill said. “If this community supports us, we’re going to have a good school, I really believe that.”