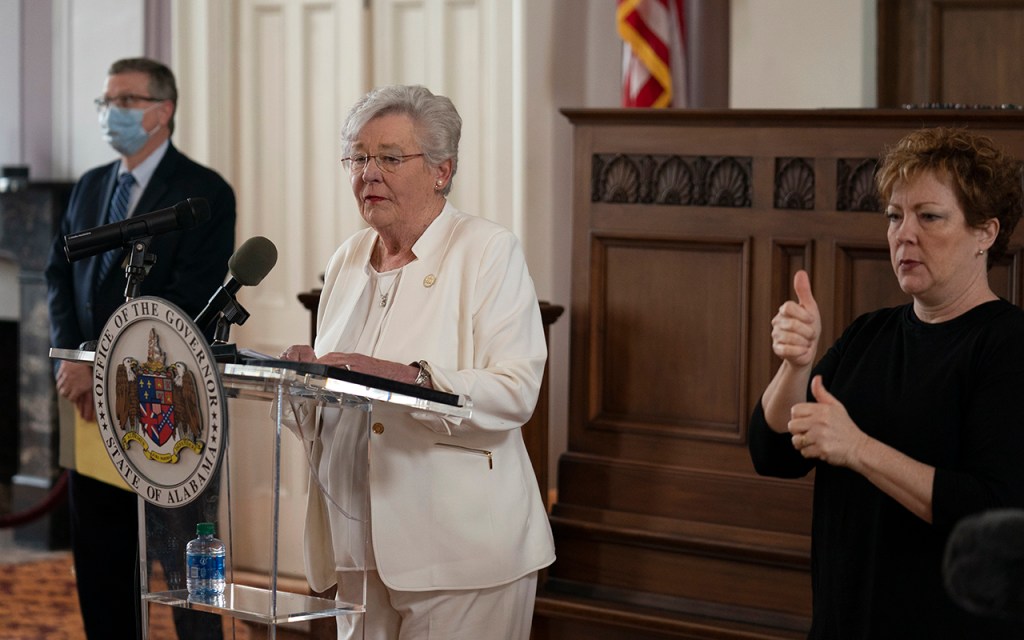 Gov. Kay Ivey held a press conference to update the COVID-19 situation in Alabama Friday May 8, 2020 in Montgomery, Ala. (Governor's Office/Hal Yeager)

During a press conference Friday morning, Gov. Kay Ivey announced amendments to her “Safer at Home” order, which was issued April 28.

Under the amendments to the order, restaurants, close contact service providers such as barbershops, hair and nail salons and athletic facilities like gyms will be allowed to reopen on Monday, May 11.

Under the amendment to the order, restaurants must reopen at a 50 percent occupancy rate, and maintain a sic foot distance between tables and follow other guidelines that have been determined by the Alabama Restaurant and Hospitality Association.

Barbershops, hair salons, nail salons and other close contact service providers will be required to take similar safety measures under guidelines from the Alabama Board of Cosmetology.

“They will be under strict guidance that they practice intense cleaning methods and social distancing,” said Ivey.

In addition to the aforementioned lifting of restrictions, Ivey also announced an amendment to the previous order that all non-work related gatherings of 10 more people that cannot appropriately maintain a six-foot distance between one another be prohibited.

The order was amended by the Governor to prohibit all gatherings in which people cannot maintain a six-foot distance between one another, not just those of 10 or more people.

Along with the amendments, the Governor also extended the “Safer at Home” order to continue through May 22 – the order was originally set to expire May 15.

After the amendments were announced, Ivey’s tone became grave as she said the threat of the virus still lingers.

“I know that I sound like a broken record but friends, I can’t say this more clearly. The threat of COVID-19 continues to exist. It is truly deadly and it must be addressed.”

Ivey then said she and State Health Officer Dr. Scott Harris were working with boards across the state to determine which establishments would be allowed to open next, an announcement the Governor said she hope to make during the middle of next week.

“The Governor has the responsibility to of looking after both the economic well-being of our people and the state’s economy as well their health and safety,” said Ivey. “Because the people of Alabama are vigilant and they are abiding by the rules, we do believe it’s okay to expand these orders and provide people with additional opportunities to go back to work.”