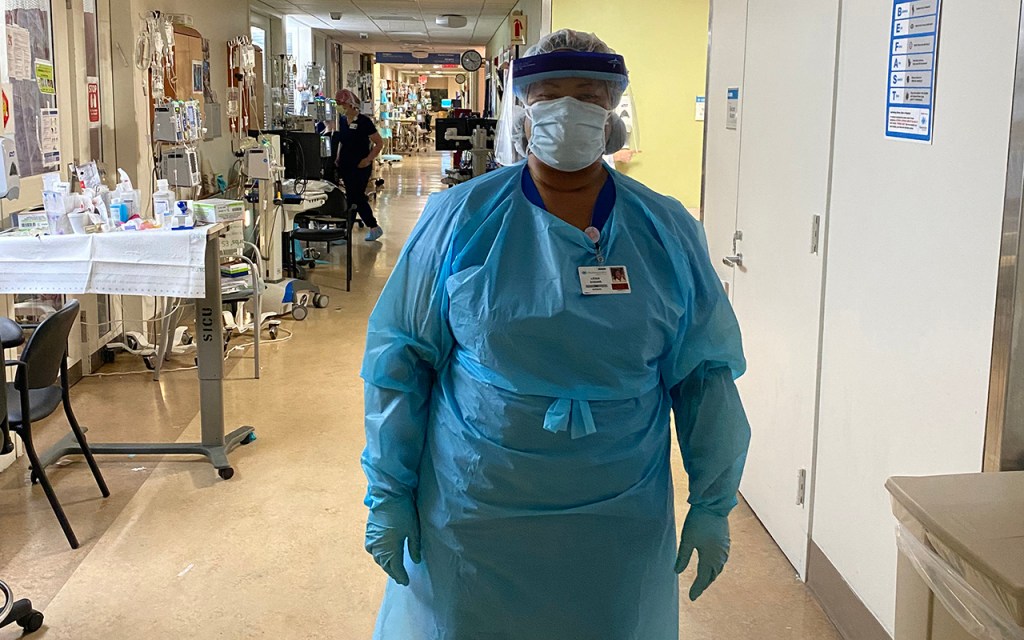 Three nurses from the Queen City recently packed their bags and headed north to Brooklyn, New York, right into the hotbed of the COVID-19 outbreak in the United States, to assist in combating the pandemic.

The Nurses – Theresa Terry, Lesia Eddins and Mattie Knight – are all former employees at Vaughan Regional Medical Center (VRMC), but all three decided their talents would be better served where they were needed more, at Maimonides Medical Center in Brooklyn.

Before the three nurses left for Brooklyn, for eight weeks, followed by a two-week quarantine period, VRMC had furloughed several employees, and were cutting the hours of others.

While Knight had left VRMC in February to pursue travel nursing, Terry and Eddins were looking at having their hours cut drastically.

“It was something me, Lisa and Mattie had always wanted to do and the opportunity was there and Vaughan didn’t really need us so we decided to come,” said Terry.

Shortly after she arrived in Brooklyn, Terry was let go from VRMC and Eddins left VRMC for Brooklyn after she was told there would not be a job for her when she returned if she left.

Though all three nurses left for Brooklyn unsure of where they’ll work once they return home, the warm welcome they received from New Yorkers was enough to assure them they’d made the right decision.

Terry said the stereotype about rude New Yorkers melted away as they received a hero’s welcome the moment they landed in New York from nearly everyone: airport security, Uber drivers and hotel staff.

“People are hollering outside their car windows, ‘thank you for coming’. Everyone has welcomed us with open arms. Literally everyone,” said Knight.

“I haven’t encountered anyone with a negative attitude,” said Eddins.

Eddins said the most thanks she’s received since she arrived has come from Maimonides Medical Center’s nurses.

The nurses said support from back home has been equally surprising.

“We are just overwhelmed from the support that everybody back home has shown,” said Terry “We didn’t expect all this.”

Terry said she’s received numerous calls, texts and Facebook messages, many of which are from people she hadn’t heard from in years, showing support for her and the other nurses.

The support from New Yorkers, the Maimonides staff and from Selma has, without a doubt, helped the nurses weather the task of caring for COVID-19 patients each day.

“It’s just unreal,” said Terry. “I’ve never seen anything like it in my entire life. The first two nights, I lost patients both nights. All they can do is tag them, put them in body bags and then somebody comes and gets them. It’s awful.”

The nurses arrive for their 14 hour shifts in head-to-toe Personal Protection Equipment (PPE) including face shields, masks, gloves, gowns and foot covers, and rarely have time for even a water break.

“During orientation, they told us to drink plenty of water before we got here, because we might not get any all night,” said Terry. “The first night I was able to grab a bottle of water and take one drink out of it. That was it for the entire night.”

Eddins said entering the unit, full of COVID-19 patients, for the first time was an emotional experience.

“As soon as you get there you see family members saying there last goodbyes,” said Eddins. “During shifts patients die. The only times visitors are let in is when they know the patient won’t make it., then they call in the family to say goodbye. I’ve seen it happen to a lot of people already, young and old, it’s just sad.”

Though she’s only worked a few days, Knight said she’s already learned more than she ever learned at VRMC because of all of the critical care patients she’s seen.

The circumstances of the pandemic have given the least experienced of the three nurses, four years compared to Terry’s 27 and Eddins’ 29 years, quite a bit of training.

“I’m getting way more experience than I’ve ever gotten before,” said Knight. “I’ve really had to educate myself. I’m already learning more than I ever did at Vaughan just because I’m seeing so many critical care patients.”

Knight’s time at VRMC was her first job and she said Terry and Knight both taught her “everything she knows.”

Though all three nurses working different buildings during their shifts, Knight said it was good to have the veteran nurses alongside her on the journey for their support.

“I don’t know what I’d do without them,” said Knight. “It’s good being here with those veteran nurses and it’s also good to have someone to vent about your night to. I’m glad I’m here with a group to have that support.”

Despite the challenges the three nurses have faced in just the short time they’ve now been in Brooklyn, they all said that this is where they know they’re needed.

“When you have a relationship with God and you know you’re doing the right thing everything just falls into place. I feel like I’m in the right place,” said Eddins.

“There’s been so much media attention [on the pandemic in New York],” said Knight. “My heart just went out to the doctors and nurses up here who are putting their lives on the line. I just felt called to come up here and help. We know what it’s like being short staffed and overworked… I was glad to get the opportunity.”

“When I got here, I realized I was here for so much more,” said Terry. “God had a purpose for us to come here and he’s got a purpose for us when we come back home. We might not understand it right now, but this is all part of a plan and we’re just trying to follow where he’s leading.”

“I had a patient ask me, with my country accent, where I was from,” said Terry. “I told her ‘Alabama’.”

“You came all this way?” said Terry’s patient.

Thank you so much for taking care of us,” said Terry’s patient.

“To hear that from a patient that’s lying in a hospital bed sick means so much,” said Terry. “So much.”