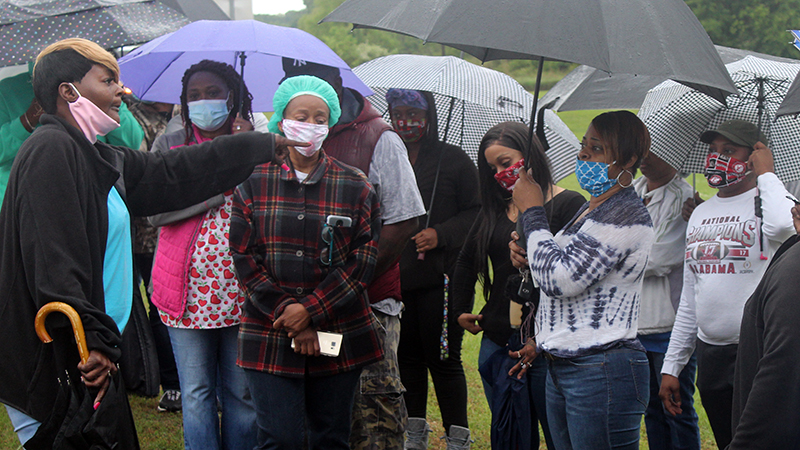 A group of American Apparel employees walked out of the factory Thursday in protest after rumors that a second employee at the Dallas County manufacturer had tested positive for COVID-19.
Employees were informed of the first confirmed infection of a fellow employee on Wednesday evening, after a letter from Chuck Lambert, the company’s president and CEO, was given employees.
The second case was confirmed Thursday by the Alabama Department of Public Health (ADPH) after a majority of employees had already walked out of the facility that morning.
Upon confirmation of the second case, the factory was closed and remaining employees were sent home. Although the factory was closed, workers were told they would be paid their usual wages for Thursday and Friday while a professional deep cleaning is done in advance of workers returning on Monday.
Lambert said he understood employees’ concerns, but called the act of leaving in protest “unnecessary.”
“We can’t react on people’s say-so, we have to wait for confirmation from the Health Department,” Lambert said. “Our people this morning got excited and some of them walked out because they’re scared. It’s just a tough time for everybody. We’re going to do the very best we can, and we’ve done that throughout.”
Lambert said the second, most recent, person to be diagnosed was last in the building on Thursday, April 16, and that the first employee to be diagnosed with the virus has not been in the factory for at least 12 days.
Lambert said numerous safety measures have been implemented at the plant during the outbreak of the virus, including cooperative guidance from both the ADPH and the Centers for Disease Control and Prevention (CDC), daily cleaning of the facility, and extensive cleaning on the weekends, social distancing practices, and temperature checks for employees upon entering the workplace.
Lambert said co-workers who have been in close contact with the diagnosed employees will be notified, and cited health guidelines that stated anyone not in close contact with the diagnosed employees were at low risk for infection.
“We have followed the CDC guidelines all the way through,” Lambert said.
American Apparel Employee’s Union President LaTonya Walker said Thursday morning, as the facility was closing its doors, that she still did not feel safe working in the factory.
Union Vice President Norma Kennedy said she feels the facility should be closed for two weeks for cleaning and sanitation.
Walker said the layout of the factory floor makes social distancing difficult and that the nature of the employees’ work – sewing and assembling military garments – is at high risk for potentially spreading the virus.
“Everyone is handling the same material,” she said. “Someone touches [the garment] and then it’s passed on to somebody else and they touch it [and so on].”
American Apparel workers are slated to return Monday morning and Lambert said he is hopeful all will return, as the company currently has a contract for 187,000 face masks for the military, 10,000 of which are supposed to be shipped from Selma Monday.
“I won’t be coming back to work on Monday,” Kennedy said. “I’m not coming back for two weeks.”
According the Selma – Dallas County Economic Development Authority’s website, American Apparel employs 234 people at its Selma plant, which ranks it the sixth largest industry in Dallas County.