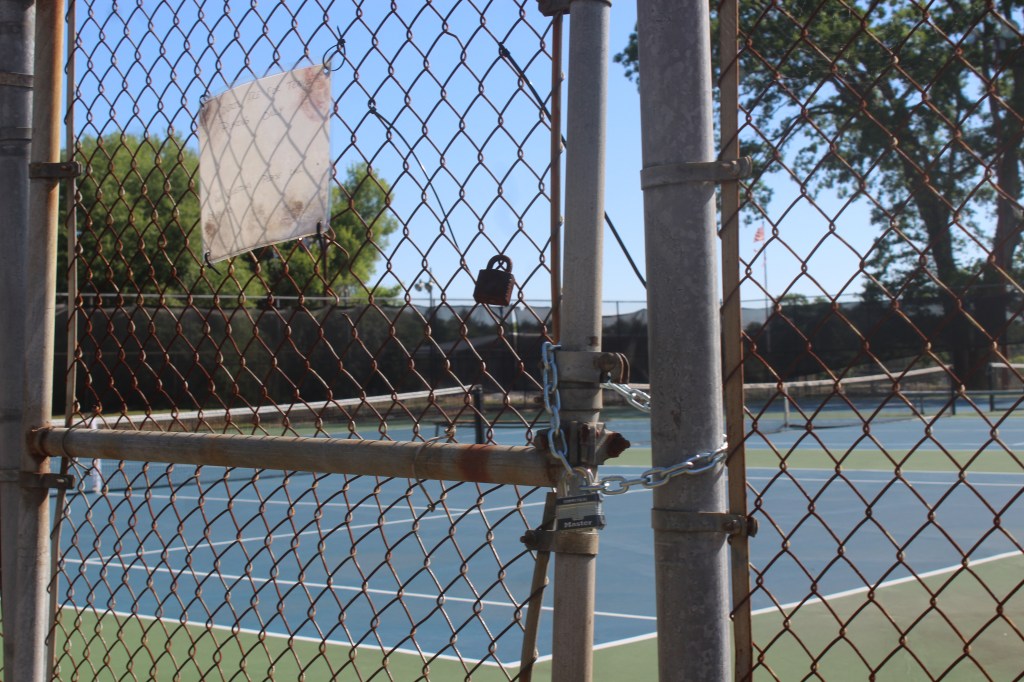 Selma residents are upset at the City Tennis Courts being closed. James Jones|Times-Journal

With the idea of social distancing to curb the spread of Covid-19 still in full effect, Selma Mayor Darrio Melton recently issued new guidelines for use of the City Park, and it has many of Selma’s tennis players upset as they were met with padlocked courts Monday.

Melton released a memo on his Facebook page entitled, “Keep Moving, Parks may only be used for solitary exercise” because of the COVID-19 pandemic.

In the memo, Melton established new rules for usage of the city park, including no group activity of two or more people inside the park; remaining six feet away from people at all times while exercising (running or walking), including family members and roommates from the same household; and no sitting.

The memo also stated the Selma Police Department would be enforcing the new directive on park usage, but it did not elaborate on what that meant.

“I’m not sure why they’re locked, I’m sure the Mayor has his reason for doing so,” Bowline said. “I’d like to know why he’s closed the tennis courts. I reached out to the Mayor and he hasn’t gotten back with me.”

The Selma Times-Journal made several attempts to contact Selma Mayor Darrio Melton for comment on this story, but was unsuccessful.

Christina Siddens, local league tennis coordinator for UTSA, points out that tennis courts are opened in four major cities, all of which have been impacted harder by Covid-19 than Selma has. Mobile, Prattville, Montgomery and Tuscaloosa, are all allowing tennis to be played on city courts, and Siddens believes the courts should be open in the Queen City.

“Tennis courts in Prattville, Montgomery, Tuscaloosa and Mobile, are open but with guidelines,” Siddens said. “They have way more COVID-19 patients than us. If they’re playing tennis, why can’t we? I don’t see a problem with us playing tennis at the city park.”

While the tennis courts in Tuscaloosa have been closed for the past two weeks, according to a story in The Tuscaloosa News, the Tuscaloosa Tennis Center is planning to reopen its courts Friday, with a new set of guidelines and procedures intended to protect users and follow social distancing requirements.

“We are so excited and look forward to seeing many of you back with us starting next week,” said Mike Goldammer, the center’s director of tennis, in an open letter announcing the reopening. “We have taken significant steps to safeguard each of you while allowing you to enjoy the many benefits tennis offers us.”

The Center’s new rules include requiring court reservations; a maximum of four players per outdoor court; no demonstration racquets will be available or any city-owned tennis equipment; and social interactions and gatherings in and around the tennis center are prohibited. The Center’s indoor courts will remain closed.

Siddens hopes the city will reverse course and reopen the courts for controlled play, just as other cities are allowing, understanding participants will have to follow the rules.

“We are maintaining the safe distance guidelines Gov. Ivey set for outdoor exercise,” Siddens said. “We play doubles and you’re six feet away from your partner. It doesn’t make sense.”