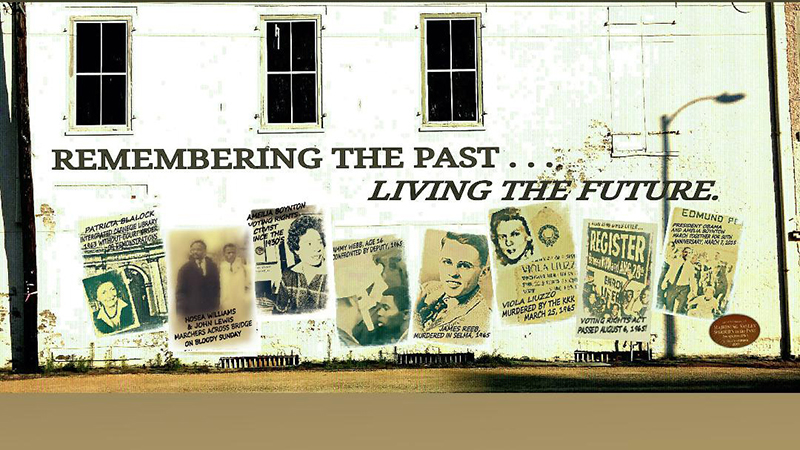 Next Saturday, a mural made up of multiple panels depicting figures and events from the civil rights era will be dedicated at 14 Broad Street as the culmination of a three-year project undertaken by Mahoning Valley Sojourn to the Past in Youngstown.

According to Selma-Dallas County Chamber of Commerce Executive Director Sheryl Smedley, the Youngstown group has been bringing students to the Queen City for Spring Break for at least the last 10 years and wanted to give back to the city.

“This is their way of doing that,” Smedley said. “We’re just so excited.”

To Smedley, the historic art installation is yet another feather in the city’s growing tourism cap.

“I believe this is really going to be a tourist attraction,” Smedley said. “People will want to come to Selma and take photos in front of the mural, like they do with the butterfly wings in Nashville. I think this will really draw people into downtown and to the Welcome Center and the Interpretive Center.”

Among those who will be in attendance for the unveiling will be Sojourn Director Penny Wells, who will be accompanied by a contingent of recent Youngstown Early College graduates and current Youngstown State University students.

“Sojourn to the Past has become really embedded in the Civil Rights Movement,” Well was quoted as saying in a Metro Monthly article. “And the Youngstown kids have really had an attachment to Selma.”

Funds for the mural, which totaled roughly $4,000, were raised via an anonymous donation, which covered about half of the cost of the mural, and contributions from Youngstown residents, many of which pitched in during an event last month at the Tyler Historical Center where National Voting Rights Museum Co-Founder Joanne Bland was the featured speaker.

The group had originally hatched a plan to refurbish the mural that sits on the site where Unitarian Rev. James Reeb was attacked two days after Bloody Sunday, but that plan was abandoned when it was discovered that the abandoned building where the work was to take place was quickly deteriorating.

The new mural to be unveiled next weekend on the side of the Selma Welcome Center will include eight aluminum panels covered in impressionistic art depicting people and events related to the Civil Rights Movement in Selma.

The eight panels depict the following people and events:

• Patricia Blalock, the local library director who integrated the Selma Public Library, without court order or public demonstrations to force her, and hired the city’s first African-American librarian;

• John Lewis and Hosea Williams, who led 600 locals across the Edmund Pettus Bridge in what has come to be known as Bloody Sunday, when peaceful protesters were beaten by local law enforcement officers;

• Amelia Boynton, leader of the Dallas County Voters League and one of those beaten on the Edmund Pettus Bridge on Bloody Sunday;

• Jimmy Webb, who at 16 led a group of teens to the local courthouse to pray following Bloody Sunday – Webb was confronted by a deputy sheriff, who attempted to intimidate him, but employed the principles of nonviolence to hold strong in his demonstration;

• Rev. James Reeb, the Unitarian minister from Boston who answered Dr. Martin Luther King Jr.’s call for people of faith to descend on Selma following the events of Bloody Sunday – Reeb was badly beaten while in Selma and later died from his injuries;

• Viola Liuzzo, who came to Selma from Detroit after Bloody Sunday – Liuzzo was transporting demonstrators between Selma and Montgomery when her car was attacked by Ku Klux Klansmen and she was killed by a gunshot to the head;

• Passage of the Voting Rights Act of 1965, which gave black people the right to register to vote for the first time;

• The 50th anniversary of Bloody Sunday, held in March 2015, in which former U.S. President Barack Obama crossed the Edmund Pettus Bridge with a wheelchair-bound Boynton and several civil rights activists, political figures and others.