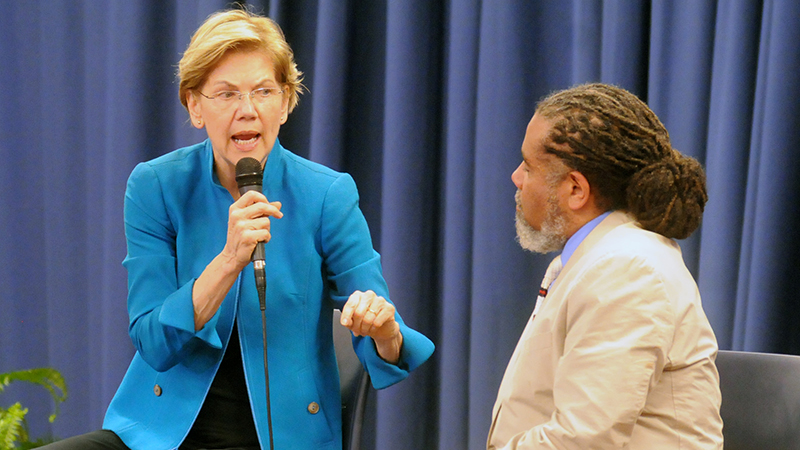 Rev. William Barber, leader of the Poor People’s Campaign, opened the event by discussing a part of Dr. Martin Luther King Jr.’s legacy that is often overlooked – in his final days, as he was calling for the establishment of the Poor People’s Campaign, King focused intensely on the need for poor black and white people to unite in pursuit of their rights, an action he opined would truly bring the powerholders to their knees.

“He said we needed a revolution of values,” Barber said. “The poor hold the key to political power. You can only control the South if you keep poor white people and poor black people from working together.”

Barber also focused on the fact that, despite a number of Democratic presidential debates, none of the candidates have focused on poverty as a key issue, noting that roughly 1.5 million people in Alabama live in poverty or low-wealth situations – nationally, that number is closer to 140 million people.

“Poverty is people who work every day,” Barber said. “We can have a lot of debate, but you cannot have a true debate…if we’re not dealing with poverty as a central issue. We want these people to know we’re poor. We’re not ashamed of being poor, we’re ashamed to live in a country where 140 million people are living in poverty.”

Barber added that it’s “almost a waste” to walk across the Edmund Pettus Bridge if the lessons learned there aren’t carried back into the community.

Following Barber’s remarks, MSNBC host and civil rights activist Mark Thompson took the stage – after commenting on the chaotic scene that unfolded at the foot of the bridge earlier in the day, where swarms of onlookers flooded the streets, rendering foot or vehicle traffic impossible, and noting that it was fortunate that no one got hurt, Thompson called on Selma’s mayor and Alabama Gov. Kay Ivey to do more to support the local civil rights celebration.

Thompson then called the first presidential candidate to the stage, Warren, and asked her how she would address poverty in Selma, which according to Thompson is the ninth poorest city in the nation.

Warren said that her proposal to implement a two-cent wealth tax on the wealthiest one-tenth of one percent of Americans, the country could afford universal childcare and Pre-K, as well as an $800 billion investment in public schools.

Additionally, Warren stated that by canceling student debt, a move that would overwhelmingly benefit people of color who borrow more for college and have a harder time paying back those loans, would “level the playing field” and close the black/white wealth gap by as much as 20 points.

Warren also took on voter suppression and the need for candidates to get out and be seen by those whose votes they’re seeking.

When asked if she feared a backlash from wealthy Americans averse to hear progressive agenda, Warren shrugged it off.

“There’s a whole lot more of us than there is of them,” Warren said. “They might have ore shoes than we do, maybe more houses than we do, but they don’t get to have a bigger share of our democracy.”

Following Warren, Klobuchar, who officially dropped out of the presidential race Monday morning, took the stage.

While Klobuchar was posed similar questions, her responses lacked the clarity of Warren’s, which were often accompanied by a far-reaching plan and data.

“This time, we’re going to have to build a big, big coalition,” Klobuchar responded when asked how she would help areas like Selma if elected president.

Klobuchar noted that she is already supporting a bill that would funnel special funding into high-poverty areas and would like to see robust investments in childcare and early education.

Klobuchar also blasted the tax cuts pushed through by U.S. President Trump’s administration, the vast majority of which went into the pockets of the nation’s wealthiest people, and vowed to repeal them if she were elected.

“I don’t think our economy can function well if people aren’t a part of it,” Klobuchar said. “I think the world isn’t fair for a lot of people.”