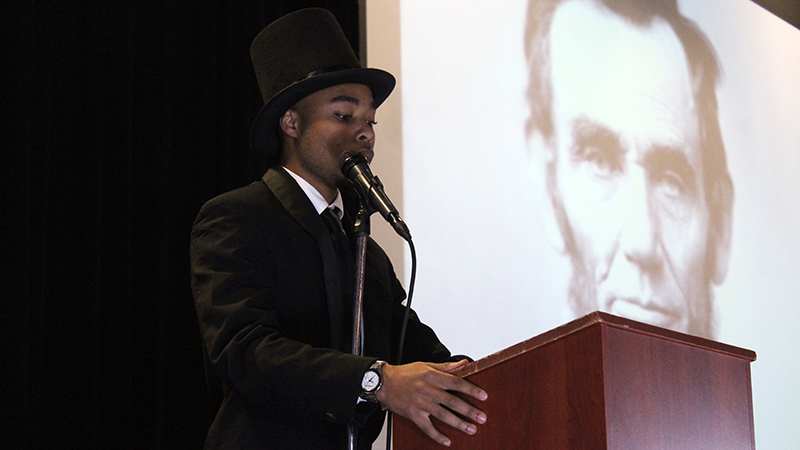 The Selma Chapter of The Links, Inc. and Selma City Schools (SCS) hosted the annual Teen Reenactment of the 1965 Voting Rights Act on Friday morning in the Selma High Auditorium.
Several local high schools participated in the reenactment, including Selma High School, Dallas County High School, Keith High School, Southside High School, Morgan Academy, Meadowview Christian Academy and Ellwood Christian Academy.
The students from area schools gathered in the auditorium and learned about democracy and the importance of their vote as they heard from student portrayals of historical figures like Abraham Lincoln, Mahatma Gandhi, Martin Luther King, Jr. Jimmy Lee Jackson, Coretta Scott King, Amelia Boynton, Marie Foster and many others.
Links, Inc. and SCS School Board member Danielle Wooten told the students in the auditorium that she hoped the students’ portrayals would inspire them to become “lifelong voters.”
“Democracy is further defined as government by the people, especially the rule of the majority,” said SCS Superintendent Dr. Avis Williams during her portion of the program.
The program also featured several songs from the Selma High School Choir, directed by Collin Lett, including “Go Down Moses,” “Ain’t Gonna Let Nobody Turn Me Around,” “Tell Me How Do You Feel,” “Oh Freedom” and “Back of the Bus.”
Members of the Selma Chapter of The Links, Inc. who worked on the program included Juanda Maxwell, who served as Chairman and Writer, Maria Dale, Nancy Sewell, Felicia Owens and Dale Bryant, who all served as Co-Chairs, and Alicia Chestnut who served as editor.
Links, Inc. Chapter President Dorothy C. Barnes said she hopes the program conveys the importance of everyone’s vote on March 3.
“Do your research and vote for the candidate you think is best,” said Barnes.