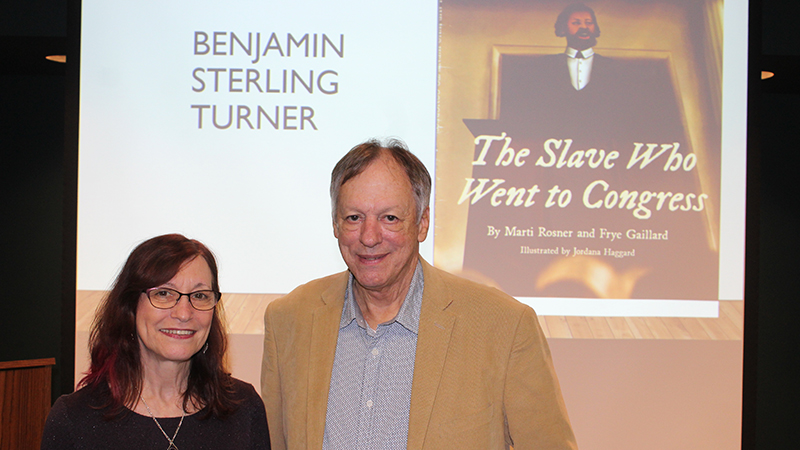 Authors Frye Gaillard and Marti Rosner stopped by the Selma-Dallas County Public Library on Thursday afternoon to discuss their children’s book, “The Slave Who Went to Congress”.
Gaillard and Rosner’s work tells the story of Benjamin Sterling Turner, a former slave who became the first African American congressman to represent Alabama after running the St. James Hotel for his owner and then fighting in the Union Army.
Gilliard said stumbled upon Turner’s story while in Selma as he was conducting research for one of his earlier works, “Cradle of freedom” which tells the story of Alabama’s Civil Rights Movement.
While visiting the National Voting Rights Museum, Gaillard saw an exhibit depicting the first African American congressmen and noticed one of them, Turner, was from Selma.
Gilliard made his way over to the Selma-Dallas County Public Library and began researching Turner further.
“I became really intrigued,” said Gaillard. “Turner seemed like such a fascinating man to me. He wanted political equality and full citizenship for former slaves and he wanted their humanity to be respected. On the other hand, he also did not hold a grudge against people involved in the Confederacy and did not want Confederates to be punished. He, like Abraham Lincoln, favored universal amnesty.”
Along with Lincoln, Gilliard compared Turner’s ideas to latter figures like Nelson Mandela and Martin Luther King, Jr.
“He wanted equality and reconciliation at the same time,” he said. “Unfortunately, his vision did not carry during reconstruction. There was too much passion, too much hurt and loss and too much racism. But if it had, we’d be a lot further than we are today.”
Gaillard published a magazine article on Turner in the early aughts and didn’t revisit Turner’s story until 2017 when be set out to write a book with Rosner, a longtime friend.
The two wanted to tell a story aimed toward children and Gaillard remembered the story of Turner.
“I became very intrigued with the story as well,” said Rosner.
The more Gaillard and Rosner dove into to Turner’s story, the more they realized how many lessons children could learn from his story.
The pair dove into articles written by Austin Fitts- whose work Gaillard called “groundbreaking’- and discovered documents at the Old Depot Museum like voters lists and a flyer for Turners livery stable which he operated while running the St. James.
Rosner, who’s been in education for 40 years, cited perseverance and determination and the importance of education as lessons within the book for young readers.
Though “The Slave Who Went to Congress” is an illustrated children’s book, Rosner said that picture books are no less effective at tackling heavy subjects.
“Picture books are very rich for students,” she said. “There are picture books that are very heavy. Pictures can really convey a story, even to children with low reading skills.”
Both Gaillard and Rosner commended the book’s illustrator, Jordana Haggard (“Like Merle Haggard,” said Gaillard.) for bringing the book to life with her art.
“Her illustrations are not only technically good, but emotionally moving as well,” said Gaillard.
“I got goosebumps the first time I saw it,” said Rosner.
Rosner also said that Haggard also worked as the books designer, deciding what illustrations accompanied what text, fonts and other of the more technical aspects of the book.
“She really deserves all the props,” said Rosner.