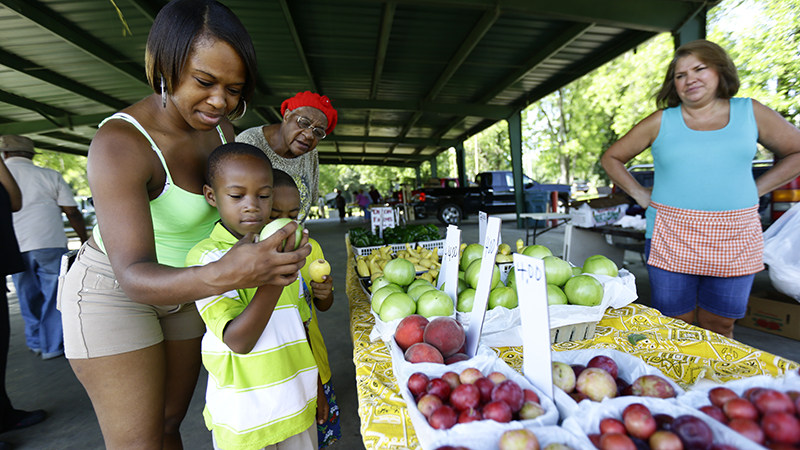 According to Dallas County Extension Coordinator Callie Nelson, the meeting allows the farmers selling their produce at the market to establish operating times and the dates of any special events that might be on the calendar and elect market managers and a committee to oversee the market.

“It’s run by the farmers themselves,” Nelson said.

Additionally, Nelson noted that farmers will receive certification from the Alabama Department of Agriculture and Industries (ADAI), which will make them eligible to accept Senior Nutrition Vouchers.

The vouchers, which allow seniors to purchase fresh produce and other items, are valued at $30 per person – without state certification, farmers won’t be allowed to accept the vouchers at the market.

According to Nelson, around 30 farmers sell their produce at the market each year and nearly that many turn up for the seasonal meeting to prepare for the market’s opening.

But Nelson is hoping for more this year.

“I think one of the things we’re running into is that we don’t always have enough produce to have a good supply when the market is open,” Nelson said, noting that the average age of area farmers is 60. “We don’t have young people coming into farming that would allow us to have a good supply everyday the market is open. If there’s anybody thinking about growing something and needs a place to sell it, come on to the meeting.”

For her part, Nelson sees the market providing a multitude of benefits to the community, which she says comes out in droves to support the farmers.

“There are two things I always tell people about the farmers market,” Nelson said. “One, anything you can buy fresh and local is going to be higher in nutritional value and also it’s going to taste better – you’re getting a tomato that has been grown and sun-ripened right here in Dallas County. It makes really good, high-quality produce available for the citizens of this county.”

“The second thing it, it gives farmers a place to sell their produce,” Nelson continued. “It’s really an economic driver for our farmers.”

Anyone interested in attending the meeting and setting up shop at the Dallas County Farmers Market this year should register by Friday, Feb. 28.

For more information, contact the Dallas County Extension Office at 334-874-3200.