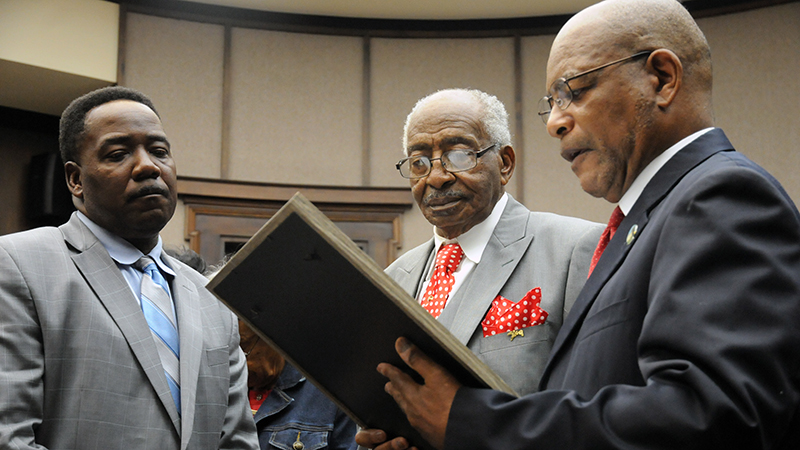 After a roughly 30 minute executive session, the Selma City Council emerged and called its regular meeting to order, wasting little time in approving a wide swath of resolutions and contracts on the night’s consent agenda.

The first item approved reserved $165,000 from the lodging fee account and $100,000 previously reserved for the jail lease to be used to patch the sinkhole near Riverfront Park.

During Monday’s work session, Selma City Treasurer Ronita Wade proposed the two accounts as places from which funds could be pulled to repair the sinkhole, which is only growing amid continual rainfall.

The council also approved payment of $1,500 to Harrell’s Refrigeration Service for work at the Old Depot Museum, a $10-per-hour for Robert Walker to set up and breakdown for events at city buildings, a resolution to rescind supplemental salaries for city workers previously charged with working the county sorts facility, a payment of $250 to Selcom for phone service in the council office and $329 to PineBelt for internet service in the office and a salary of $70,000 annually for Selma Fire Department (SFD) Chief Chris Graham and a salary of $80,000 annually for Selma Police Department (SPD) Chief Kenta Fulford.

Once the consent agenda was approved, the council called former SPD Chief Earnest Tate to the front to be presented with a proclamation renaming Cole Street in his honor.

Selma City Councilman John Leashore read the proclamation as Tate and his family listened and smiled – Tate moved to Selma in 1957 and was hired by the SPD as the department’s fourth black officer; he was promoted to sergeant in 1971 and then to lieutenant in 1977; by 1994, he was promoted to shift commander and, a year later, to assistant chief; in 1997, Tate because the city’s first black Chief of Police.

The council voted for the name change during its Jan. 28 meeting, despite concern that the change might run afoul of the Alabama Memorial Preservation Act, which prohibits removing or altering historic monuments, buildings, streets and more.

A long slate of citizens appeared before the council to voice a variety of concerns, including Alpha Phi Alpha’s Billy Young, who derailed an array of plans to celebrate Selma’s bicentennial, and Marquise Neely, who was rallying support for his future restaurant and lounge on Franklin Street.

Sam Walker, representing the Bridge Crossing Jubilee committee, also appeared before the council in pursuit of permission to access the same buildings and block off the same streets as last year’s event.

Due to this being the 55th anniversary of the marches across the Edmund Pettus Bridge, Walker states that organizers are expecting to see higher attendance, both from visitors and vendors.

Walker noted that organizers were concerned about the vendors that cropped up throughout downtown last year, beyond the festival’s boundaries, and stated that he had conferred with Selma Mayor Darrio Melton about resolving this issue this year.

This year’s event will kick off Thursday, Feb. 27 in order to stay ahead of the March 3 primary election.

Donovan McGuire, on behalf of the Dallas County Democratic Executive Committee (DCDEC) announces a forum that will be hosted Tuesday, Feb. 25, at 6 p.m. at the Performing Arts Center.

According to McGuire, the forum’s topic will be “Transforming Dallas County” and all county candidates for commission, tax assessor, tax collector and constable, as well as candidates for the District 5 State School Board sweat, will have an opportunity to share their vision for the county.

Elsewhere in the meeting, the council approved a contract for former SPD Chief Robert Green to stay on for three months to assist in Fulford’s transition.

Green will be paid $3,200 monthly, half of his previous monthly salary, per a recommendation from Fulford and Selma City Attorney Major Madison.