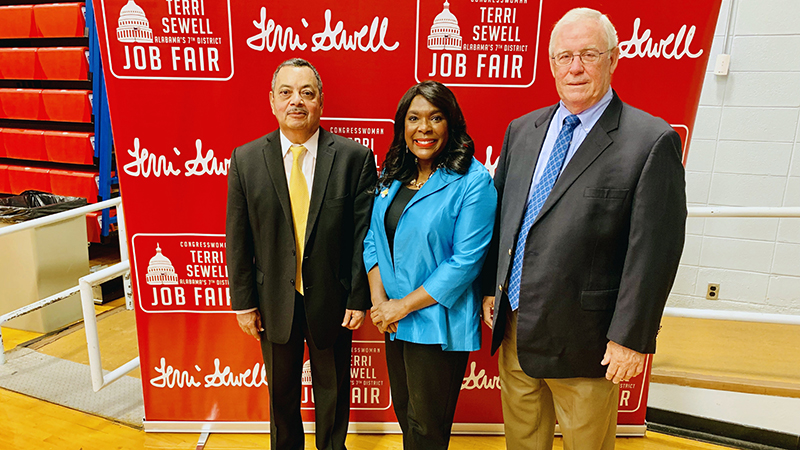 On Tuesday night, Alabama Gov. Kay Ivey gave her “State of the State” address in Montgomery and U.S. President Donald Trump gave his “State of the Union” address before a joint session of Congress in Washington – earlier that day, U.S. Rep. Terri Sewell, D-AL, issued her annual “State of the District” address detailing her 2019 victories across Alabama’s 7th Congressional District and setting a course for the year ahead.

“Over the past year, Congress has been working hard on your behalf, passing common sense legislation to address the real and tangible needs of families across our district,” Sewell said in the address. “I am proud to say that the state of our district is getting stronger because of the work we have done together thus far.”

In her address, Sewell noted that she hosted 84 district events and town halls in each of the district’s 14 counties last year.

Among those events was the 8th Annual Job Fair hosted in Selma, which brought together roughly 700 job seekers and 86 major employers from across the state – this year’s event will be hosted in Bessemer.

“Here in the 7th District, we fundamentally understand the importance of ensuring that each and every Alabamian has equal access to the ballot box and I am proud of our office’s tireless work in ensuring the passage of this legislation,” Sewell said. “My top priority since coming to Congress has been and continues to be serving the people of Alabama’s 7th Congressional District by increasing opportunity and always following our office’s motto of ‘Constituents First.’”

Sewell noted that her office “continued to prioritize community engagement and constituent services,” successfully securing $2.4 billion in grant funding for the district and recovering more than $2.28 million owed to constituents by the federal government.

Additionally, Sewell celebrated the fact that $18 million in federal funding had been secured to preserve “the sites and stories” of the Civil Rights and Voting Rights movements, which she said serve “as economic engines to provide greater tourism and economic opportunities for all.”

On the legislative front, Sewell touted expansion of the New Market Tax Credit, which provides tax credits to encourage economic investment in underserved communities, as well as passage of the FUTURE Act, which restored $255 million in annual funding for historically black colleges and universities (HBCUs).

Sewell also hailed the Centers for Medicare and Medicaid Services’ decision to increase Medicare reimbursement rates in the state as “great news for Alabama hospitals, especially those in rural areas where every dollar count,” adding that Alabama hospitals will receive about $43 million this year as a result of the change.

Sewell also secured $1.45 billion for “critical investments” in wastewater infrastructure, as well as an additional $5 million for the Rural Septic Tank Access Act, which will be used to provide grants for improving rural water systems.

Sewell was one of eight Democrats chosen to negotiate with Trump to improve the agreement.

While Sewell expressed pride in last year’s accomplishments, she already has her eyes on the year ahead.

“At the same time, I recognize that there is still so much work ahead of us,” Sewell said. “Too many in our district lack adequate employment, education and healthcare options. Too many in our district go to bed at night worried about how they will pay their bills, put dinner on the table or [purchase] their prescription medication. Yes, there are more challenges ahead.”

Sewell noted that two opportunities are on the horizon for constituents to be seen and heard – the 2020 Census and the election – and encouraged wide participation in both.

“When you respond to the 2020 Census, you help our community get its fair share of more than $800 billion per year in federal funds for schools, hospitals, roads and for programs like Head Start, Medicaid, SNAP, WIC, Section 8 housing and much more,” Sewell said. “For everyone not counted in Alabama during the last census, we lost out on $1,600 per person each year. Our district benefits when everyone is counted.”

Sewell also noted that “elections have consequences” and every “vote matters.”

“My friends, our work is far from over,” Sewell said. “But we, the people of Alabama’s 7th District, know better than anyone how to fight for what is right, even in the hardest and darkest of times. We come from good stock and we know nothing is impossible for those of faith and action.”