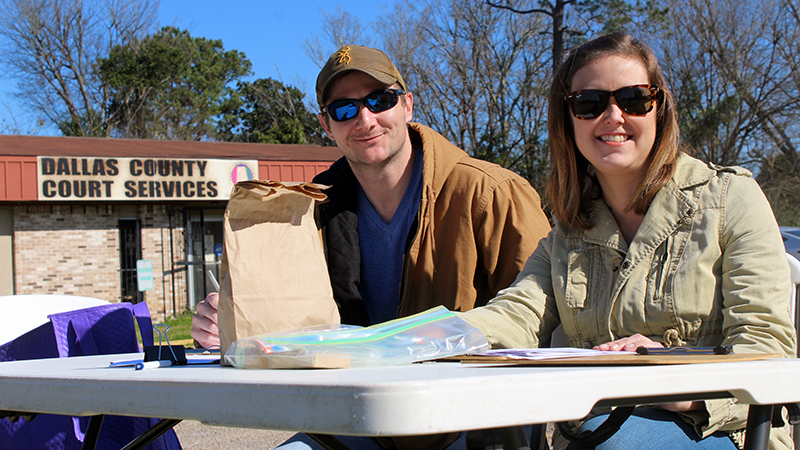 The staff of the Dallas County Family Resource Center (DCFRC), alongside partners from the Selma Center for Nonviolence, Truth and Reconciliation (SCNTR) and the Alabama Rural Coalition for the Homeless (ARCH), fanned out across Selma Thursday as part of an effort to collect an accurate count of the city’s homeless population.

According to DCFRC Program Manager and Counselor Amy Carmichael, the annual count is required by the U.S. Department of Housing and Urban Development (HUD) to gauge where services are most needed.

According to Carmichael, the annual count has taken place for the last several years, though the DCFRC only became the lead agency in the effort last year.

While volunteers from ARCH and SCNTR wandered through various areas identified as hotspots for homeless residents, Carmichael and DCFRC Executive Director James Thomas set up shop in front of Dallas County Court Services handing out bags stuffed with toiletries, socks and other supplies and taking stock of those who wandered up.

While both Thomas and Carmichael noted than an accurate count is important, the two agreed that the effort carried other benefits as well.

“It’s not so much that it’s important to have an accurate number, but to let these people know about our services and let them know that they don’t have to be out here like this,” Carmichael said.

According to Carmichael, the annual count of homeless people in Selma, which only includes those living on the street or in shelters, usually comes in at between 50 and 100 people, though Thomas recalled a recent count that registered 120 homeless people.

“We do not get anywhere near an accurate count because we don’t know where to find these people,” Carmichael said.

“They’re nomadic,” Thomas added. “They just stay wherever they can.”

For his part, Thomas estimated that the actual homeless population in the area is close to 500, including those living in temporary housing.

Ahead of Thursday’s count, the DCFRC developed a list of areas where those without homes often gather – the Edmundite Missions’ Bosco Nutrition Center, the old Good Samaritan building  the railroad tracks near the Dollar General on Broad Street, areas in Selmont and along King Street.

But even that doesn’t ensure accuracy.

“It’s always rapidly changing, so it’s very hard to pinpoint where people will be,” Carmichael said.

Both noted that more could be done to get a more definitive number, but low staffing numbers have forced the center to try to do more with less.

Homeless people counted have the option of providing personal information so that the DCFRC can reach out to them with assistance.

Additionally, there are observation forms for volunteers to use for counting people that can’t be directly accessed but can be seen.

However, Thomas noted that the DCFRC is currently in the process of hiring new employees.

Once the count is complete, the data will be handed over the ARCH, which will pass it along to HUD, which will utilize the data when handing down grants later this year.