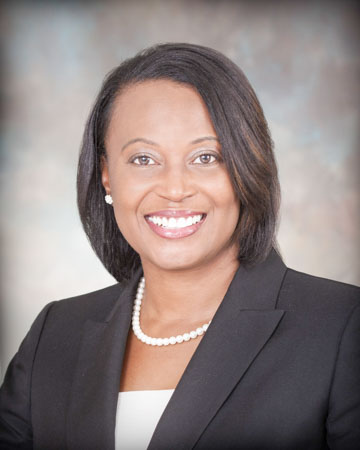 A 1992 graduate of Selma High, Peoples-Waters said the school has played a big role in her success.

“Selma High School prepared me immensely for everything that I have accomplished in life,” Peoples-Waters said. “One of the many great teachers that I credit much of my success to is Mrs. Okeke. She taught English in a way that we didn’t have a choice but to learn it well. Mrs. Sewell groomed me for leadership through our Student Government Association.”

“As an attorney, I have truly witnessed people’s best and worst points in life,” Peoples-Waters said. “I own my own practice, so the work hours are exhaustive but the reward of being a change agent is worth every second. I love being an attorney, especially when I get the ability to help my clients get some large monetary award or a favorable judgment like child custody.  I have also had the low of having to comfort the parents of my client who was killed by her abusive boyfriend.”

Peoples-Waters said her highest profile case involved Callie Adams, then a 22-year-old active duty Marine who killed her husband in self-defense in 2011.

“My most successful case is the case of Callie Adams,” Peoples-Waters said. “She was charged with murdering her husband.  The case lasted for over four years. We had numerous hearings and argued that my client responded in self-defense. Ultimately, we convinced the State Attorney to drop the murder charges. Callie Adams is a free woman today largely because of our efforts.”

Peoples-Waters said her parents, Ronald and Winona Peoples, who reside in Selma, have been outstanding role models in her life.

“The biggest influence in my life is certainly my parents,” Peoples-Waters said. “They taught me to love God, family and people. I learned to follow righteousness even when no one was looking or if it meant I was standing alone.”

Peoples-Waters has a daughter, Jasmine Waters, who’s a freshman at Florida A&M University majoring in computer engineering – despite the demanding schedule, she has always made time for her family.

“The life of a lawyer and business owner is quite demanding but it also has allowed me great flexibility to attend many school activities and take vacations to enjoy family time,” Peoples-Waters said.