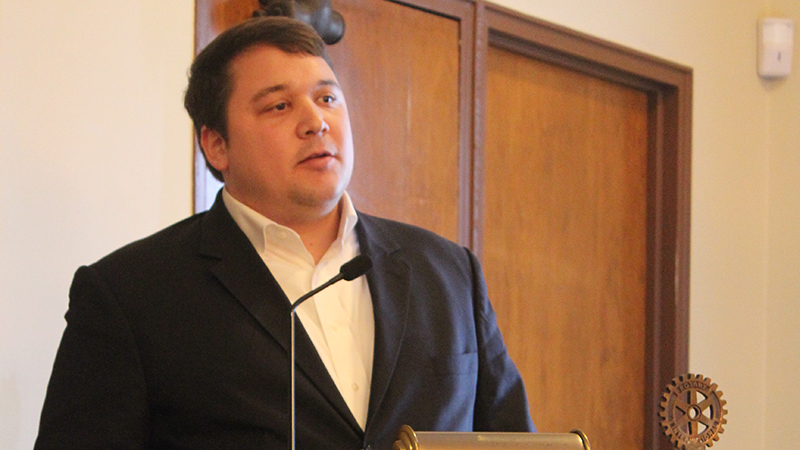 Rhaglan Hospitality Regional Director Race Banks spoke to the Selma Rotary Club on Monday afternoon to share his expectations for the hotel.

“I expect the St. James Hotel to be one of the best hotels in the southeast. Period,” said Banks before the group of Rotarians during his presentation. “That’s the only way I’m going to operate it.”

Banks, the General Manager of the Redmont Hotel in Birmingham, another Rhaglan hotel, is overseeing the opening of the Hotel over the next few months.

Banks began his presentation with a report on Friday’s St. James Hotel Job Fair, which was held at ArtsRevive.

According to Banks, the Job Fair saw 358 jobseekers before Friday’s power outage cut the event short.

Banks said that Rhaglan saw some “great candidates” and that Selma should be proud of everyone that showed up Friday.

Later in his presentation, Banks stated that one of Rhaglan’s core values was to hire local talent to staff its hotels.

After a brief report on the job fair, Banks discussed some of the renovations at the hotel, including the conversion of the former hotel’s ballroom and corner suites into additional guest rooms.

Banks then mentioned that the St. James Hotel wasn’t the end of Rhaglan in Selma, but only the beginning, sharing with the Rotarians that Rhaglan is also interested in the property adjacent to the St. James, but that the company doesn’t yet have any specific plans.

A question and answer session between Banks and the Rotarians brought forth a little more information about the hotel.

The hotel’s restaurant and bar, to be named “The Sterling Restaurant and Bar,” will be one cohesive space with a utilized courtyard featuring upscale American cuisine.

According to Banks, a chef who’s been training at the Redmont for the past five years will oversee kitchen operations.

“The restaurant will rival anything we’ve put in Birmingham,” said Banks.

As for the hotel’s opening date, Banks said that “early spring” would likely be the opening time for the hotel.

Banks said that many factors determine the opening and that Hilton is “100 percent” in control.