Sewell on front lines for explosive year in Washington 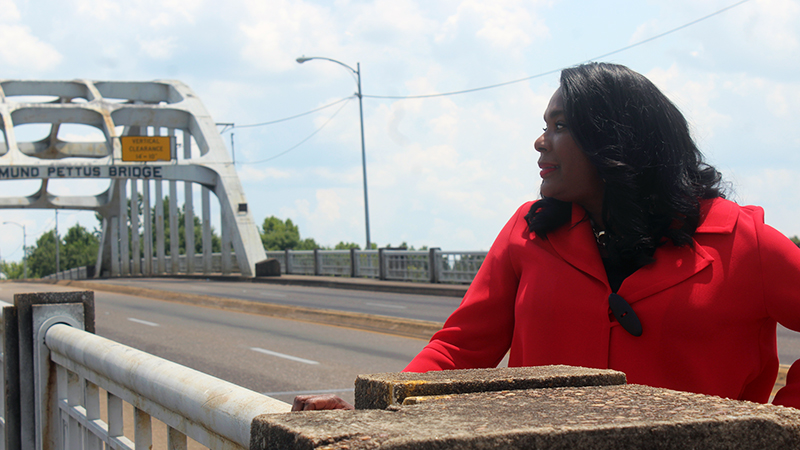 When Democrats took control of the U.S. House of Representatives in November 2018, they wasted little time passing a slew of bills, many of which would languish in a stack on the desk of Senate Majority Leader Mitch McConnell, R-KY, and challenging President Donald Trump – only four days into 2019, U.S. Rep. Terri Sewell, D-AL, backed the For the People Act, a package of democracy bills with sweeping election, campaign finance and ethics reforms, as well as well as the Voting Rights Advancement Act (VRAA) – Sewell would wait nearly the entire year before the VRAA would be passed by the House.

“The American people asked for reforms that give everyone a fair voice in our elections and Democrats are delivering,” Sewell said in a statement when the bills were introduced. “In Alabama’s 7th District, our families marched, bled, and died for their right to have a fair voice in our democracy, but today new strategies for disenfranchisement are keeping eligible voters from engaging in our elections.”

By the end of January, Sewell was fighting to reopen the government, which had been shuddered over opposition to funding for Trump’s border wall.

Before casting her 10th vote to reopen the government in less than a month, Sewell met with Transportation Security Administration (TSA) workers at the airports in Birmingham and Montgomery to hear how the shutdown had impacted them.

“I have met with federal workers in my district who are depending on us to do our jobs and re-open the government as soon as possible,” Sewell said at the time. “I am calling on Senate Republicans to put partisan politics aside and vote on the House bills we passed so that our federal workers get the pay they are due.”

Not long after, the government was reopened.

By February, Sewell was taking Trump to task over his “State of the Union” address.

“The President’s promises of bipartisanship and unity tonight ring hollow,” Sewell said on Feb. 5. “Actions speak louder than words. Over and over, the Trump administration has pursued divisive and destructive policies that have failed the middle class. The President has attacked people with pre-existing conditions and American’s right to health care. He has put corporate interests above those of working families by passing the GOP tax scam and denying federal workers their hard-earned paychecks during the longest government shutdown in U.S. history. Day in and day out, the President has sowed a culture of fear and falsehoods and put his own personal interests above those of the American people. I am fighting every day to bring more opportunities and high-paying jobs to Alabama and I am proud to work with my colleagues this Congress on a bold agenda to deliver real results for the people of Alabama’s 7th District in a transparent, bipartisan and unifying way.”

“We know that access to good primary care results in people living longer, healthier lives, but in many communities across the country, including many in Alabama’s 7th District, medical professional shortages threaten access to quality health care,” Sewell said in a Feb. 8 statement. “Every American should be able to receive the care they need, regardless of where they live…”

By the end of February, Sewell cast her vote in support of a bipartisan measure to require background checks on anyone purchasing a firearm – the legislation passed the House by a vote of 240-190.

“Today’s vote is historic – it is the first time in my eight years in Congress that the House of Representatives has taken bold action to protect our communities from gun violence,” Sewell said. “This legislation will help keep firearms away from dangerous people by ensuring that individuals already prohibited from firearm possession under federal law are not able to obtain a gun.”

By the end of March, Washington was abuzz with talk of Special Counsel Robert Mueller’s report regarding Russian meddling in the 2016 presidential election.

In those first days following the report’s completion, lawmakers were up in arms over the possibility that the full report would not be made public.

“I reject claims that the Special Counsel investigation was a partisan witch hunt,” Sewell said in a March 24 statement. “Whether we like it or not, I believe that it was a necessary process to get to the bottom of many suspicious activities by the President and his associates with the Russian government and oligarchs. This cloud over the current presidency needed to be investigated to regain more public trust and confidence in President Trump’s actions. It speaks volumes that his actions are in question at all. There are no winners and losers in the Special Counsel’s report because the undeniable fact is that Russia did and will continue to make every effort to interfere in our elections. We must focus on this global threat and establish safeguards at every level of government to meet this challenge.”

“The sad reality is that Alabama has one of the largest pay gaps in the country,” Sewell said. “Equal pay, though, is not just a women’s issue – it is an economic issue. When women in Alabama earn just 76 cents for every dollar paid to men, it costs the state economy more than $11 billion every year. America succeeds when women succeed. It’s past time to do what is right and ensure women receive equal pay for an equal day’s work.”

In April, Sewell spoke out about the U.S. Department of Justice report on the conditions in Alabama’s prisons, calling the findings “deeply disturbing” and urging Alabama Gov. Kay Ivey and the state legislature to take action.

“Our rural communities depend on reliable infrastructure, access to broadband and secure energy sources for their local economies to thrive,” Sewell said. “Alabama’s rural electric co-ops provide essential broadband services in rural areas where high-speed internet is limited but essential to those areas’ economic growth. We must do more to provide high-speed internet – and the opportunities and resources that it brings – to the 22.4 million Americans living in rural parts of our country without quality internet access.”

A few days later, a redacted version of the so-called “Mueller report” was made available, sparking a strong rebuke of the president’s actions from Sewell.

“Even in its incomplete form, the redacted Special Counsel report makes one thing very clear: irrespective of whether President Trump and his campaign’s actions were criminal, they were dishonest, unethical, immoral and, ultimately, unpatriotic,” Sewell said. “The American people deserve better from their public officials, especially those who serve at the highest levels of our government, and transparency demands that Congress is presented with the full report and underlying materials.”

In May, Sewell welcomed students from Selma to Washington as part of their victory in the 2018 Congressional App Challenge and in June she celebrated House passage of more than $718 million in federal funding for rural water and wastewater loan and grant programs.

In July, Sewell hosted her 8th Annual Job Fair in Selma and was named Co-Chair of the House Ways and Means Committee’s Rural and Underserved Communities Health Task Force.

In August, Sewell announced that more than $127,000 in grant funding had been awarded to support Opportunity Zones in Alabama’s Black Belt.

“There is nothing more important to me than increasing opportunity across Alabama’s 7th District,” said Sewell. “That is why I have fought so hard to make the Opportunity Zone program work for areas like the Black Belt, where communities will most benefit from increased economic opportunity.”

By September, the impeachment inquiry into Trump was ramping up and Sewell had a front row seat as a member of the House Intelligence Committee, where she grilled witnesses on what they knew about the president’s efforts in Ukraine.

By the end of the year, on Dec. 6, shortly before lawmakers left Washington for the holidays, Sewell saw the VRAA clear the House.

“Voting is personal to me, not only because I represent America’s Civil Rights District—but because it was on the streets of my hometown, Selma, Alabama, that foot soldiers shed their blood on the Edmund Pettus Bridge so that all Americans—regardless of race—could vote,” Sewell said.