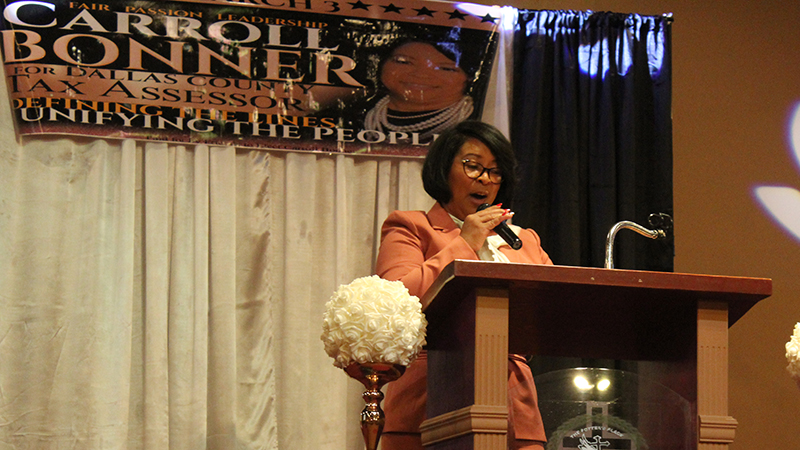 Before a congregation of supporters, Carroll Bonner kicked of her campaign for Dallas County Tax Assessor Sunday evening at Potter’s Place Church.

Before speaking to the crowd of supporters gathered in the church, others spoke about the character of Bonner, including Orrville Mayor Louvenia Lumpkin, Pastor James Perkins and Bonner’s husband, Bishop Patrick Bonner.

Lumpkin offered words of encouragement to Carroll Bonner as she begins her campaign, urging her to lean on her family and church family for support during the trying times ahead.

“Don’t doubt,” Lumpkin said. “Don’t ever think about what you can’t do.”

Perkins then made similar remarks, adding that Bonner needed the support of everyone gathered to become tax assessor.

“Give her the opportunity to do the job,” said Perkins.

Perkins then kicked off Bonner’s campaign fundraiser by asking those in attendance to make a donation.

The majority of the crowd responded by placing a check or cash at the altar of the church to be collected for Bonner’s campaign.

After being introduced by her husband, Bonner finally stepped behind the podium to address her supporters.

Bonner said that, if elected, she would bring her qualities of fairness, transparency and availability to every property owner in Dallas County.

“All property owners should be assessed fairly,” said Bonner.

Bonner stressed the importance of a tax assessor’s role, stating how important taxes are in maintaining county roads and schools.

As Dallas County Tax Assessor, Bonner said she would also like to work to make online property taxes much easier for the people of Dallas County to use, calling the current website “difficult to navigate.”

“I’m not a superwoman,” said Bonner. “But I’m not saying theses thing are impossible…vote Carroll Bonner.”