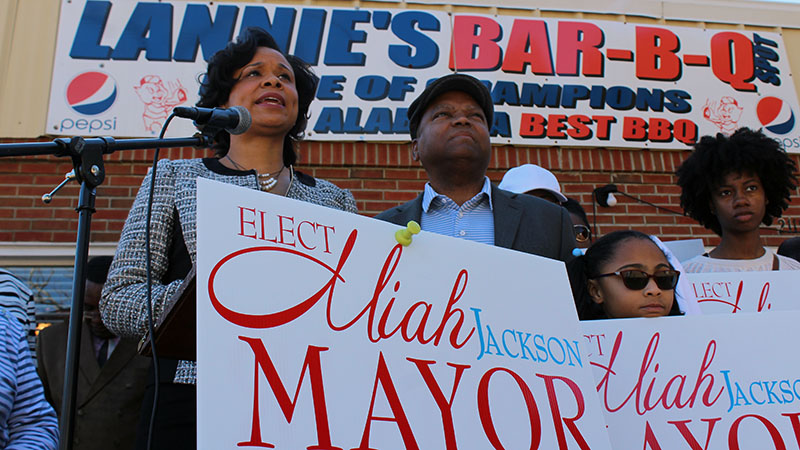 Among the throng of supporters were Selma City Councilwoman Jannie Thomas and Dallas County Commissioner Curtis Williams, who led the group in prayer before Jackson’s husband, Dallas County District Attorney Michael Jackson, welcomed those in attendance.

“People are looking for a change,” Michael Jackson said. “We can do better. We have a person here who cares, who believes in talking to everyone, who will have an open-door policy and is tough.”

Upon taking the microphone, Miah Jackson noted that she chose Lannie’s because it is a “cornerstone” of the community and an “enduring staple” of the city.

Further, she noted the day of her announcement – the 199th birthday of the city.

Miah Jackson thanked the “strong women” in her life that led her to Wednesday’s moment and promised to tackle some of the city’s most pressing issue, such as piles of trash, violence, divisiveness in city government and a tight budget.

“We are all seeking change, a new beginning and a more hopeful future,” Miah Jackson said. “Change does not occur by accident. Change is intentional.”

Miah Jackson discussed the city’s budget crisis, saying that a solution “starts with rooting out corruption” and addressing “the city’s needs without going overboard.”

She discussed the need to beautify neighborhoods and address dilapidated structures, as well as the need to bolster education and public safety in the city.

“I’m confident that a united Selma can accomplish anything,” Miah Jackson said. “I hope you’ll join me. Allow your voice to be heard and your vote to be counted. Stand with me for reach change in our community and a better future for [the] next generation.”