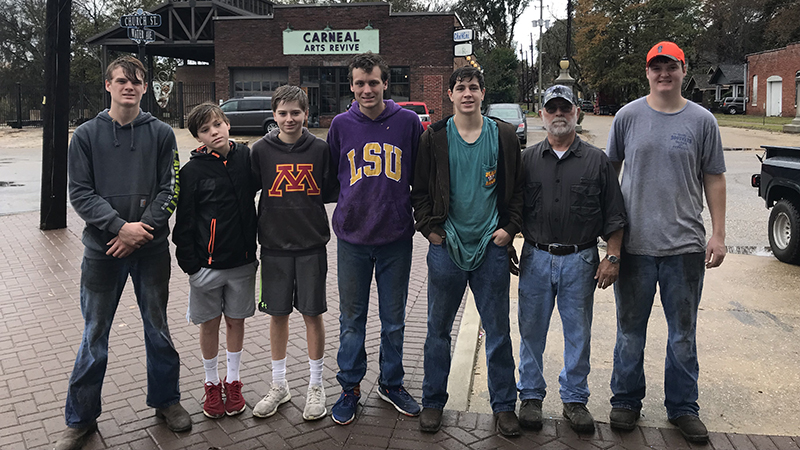 In order to earn his Eagle Scout badge, Morgan Academy Senior Trent Huff worked with ArtsRevive to clean out two spaces near the end of Water Avenue, near ArtsRevive, one of which will be used for a retail storefront and the other will be a communal art space.
Trent and his fellow scouts, their families and ArtsRevive Supporters spent the better part of two Saturdays filling dumpsters with all manner of trash and scrap.
ArtsRevive Executive Director Becky Youngblood said she couldn’t begin to express how thankful she was for the scouts and their “sweat equity”.
“We’re so thankful to Trent [Huff] and all his effort,” said Youngblood. “And also, all of the Boy Scout leaders. We [ArtsRevive] have worked with them before, and when the set out to complete a project they really show up and get it done.”
Youngblood said the effort from everyone pitching in to clean up saved ArtsRevive a lot of money in renovating the spaces.
Youngblood says that the communal art space is something that the community has been asking for.
The space will be able to house eight artists, in exchange for a low rent ($50-$100 per month) any artists who sets up in the space will be required to each an art class at a local school, or provide a workshop to the community.
The space will also have a room set up to rent where others can host other works shops and classes for $100 per day.
Amy Pilcher, Trent’s mom, Said she was proud of her son’s effort to clean up the two spaces so that they could be used for the arts.
“My husband and I are big supporters of ArtsRevive,” said Pilcher. “When Trent and I approached Becky [Youngblood] to ask about whether they had a project that would be suitable for an Eagle Scout project they had this immediate need.”
Pilcher also expressed her gratitude for Boy Scout leaders.
“They’re all such good male role models,” she said. “They really show boys how to become men.”