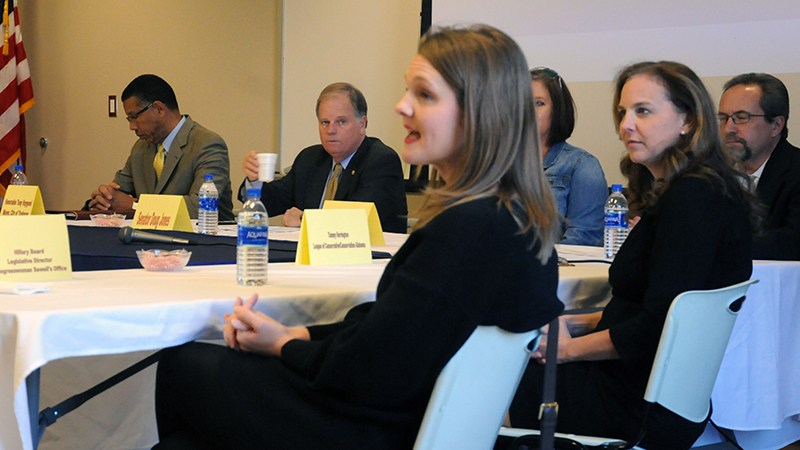 Jones was joined by a panelist of area leaders, environmental advocates and others to discuss environmental issues plaguing the Black Belt, specifically as it relates to wastewater infrastructure, poor soil and related issues.

Jones noted that there are “systemic and structural” issues that have long plagued the area and emphasized collaboration between local stakeholders and state and federal authorities.

Among those on the panel was Perman Hardy, an environmental advocate in Lowndes County that has been working to address wastewater infrastructure needs in the area by working with residents, the Alabama Department of Public Health (ADPH) and others.

Hardy said there is a “forgotten side” of Lowndes County that is “hungry for a solution.”

Along with the expense that has kept people from accessing wastewater infrastructure, Hardy noted that residents are unable to access the system currently serving the city center.

The ADPH is currently working on a program in the area that will help at least 100 households access wastewater infrastructure, which it hopes will serve as a model to similar communities across the state.

Perry County Commissioner Ben Eaton was also on the panel and noted that many of the issues that have long plagued Uniontown are similar to those facing Lowndes County residents.

Eaton noted that a plan to ship wastewater 20 miles away to Demopolis was expensive and unfeasible, so he is meeting with another company to address the issue.

“The fight is still on,” Eton said. “It’s not comforting with things going on right now, but we still have a voice.”

Tuskegee Mayor Tony Haygood was also on hand and noted that his city has faced similar difficulties, often being forced to divert city money to addressing wastewater issues stemming from the county – a necessary move to provide for everyone in the area.