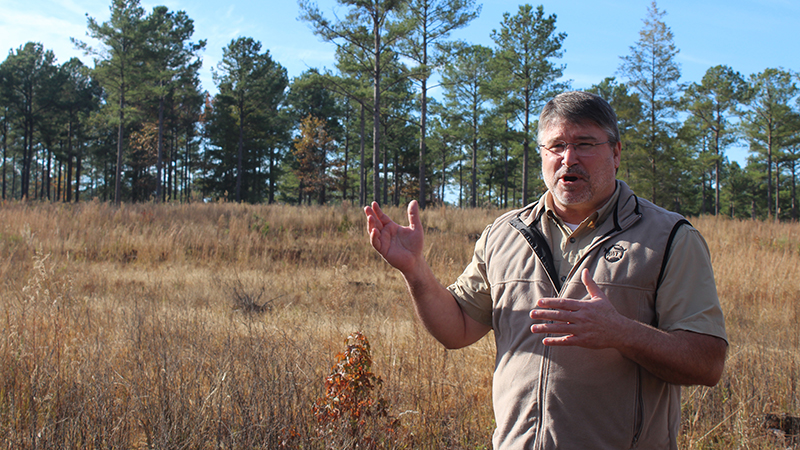 A 1700-acre plot of land in Orrville, near Old Cahawba, has received a grant from the National Fish and Wildlife Foundation (NFWF) for conservation efforts.

Southern Company and its subsidiaries, Georgia Power, Mississippi Power and Alabama Power, are among the supporters of the NFWF.

Claude Jenkins, Senior Resource Stewardship Biologist with the Alabama Wildlife Federation (AWF) and the manager of the property, Lee Cummings, gave representatives from Southern Company subsidiaries, who were in Selma for a conference, a tour of the land so they could see for themselves the conservation efforts being made.

“It’s a really great opportunity to see some of the restoration work they are doing in this area around prairies and longleaf pine habitat,” said Jason Carlee, an Alabama Power environmental specialist. “Alabama Power has had a partnership with AWF for a number of years and has been able to do some great conservation work around the state. Alabama Power is committed to improving the communities where we work and live.”

Over the past five years, Jenkins has consulted Cummings on how to restore pieces of the property back into prairies that would have naturally existed before European settlement in the state.

According to Jenkins, prairies are a biologically diverse ecosystem that create a thriving environment of wild turkey, white-tailed deer and bobwhite quail.

Jenkins, who also serves as chairman of the Black Belt Prairie Restoration Initiative, is passionate about prairies

“Working with prairies is so exciting,” said Jenkins. “It’s like a box of chocolates, you never know what you’re going to get.”

Jenkins says that prairies don’t get the conservation attention that other ecosystems get, but several private landowners are discovering the beauty and abundance of flora and fauna the landscapes bring.

“Many of the landowners I work with fall in love with prairies when they see what can be done,” said Jenkins.

Cummings thanked Jenkins for his guidance in turning the overgrown forests into a diverse new ecosystem so it can be used for recreational purposes, such as hunting.

‘I’d have never known about any of this if Claude [Jenkins] hadn’t informed me,” he said.

Cummings added that he’s seen many neighboring landowners show an interest in conservation effort after seeing the work he’s done to the land under Jenkin’s consultation.