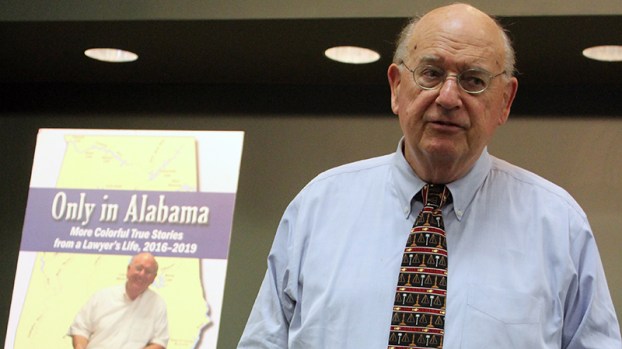 Montgomery attorney Julian McPhillips was in Selma Monday – not to represent one of his many clients in the Queen City, but to promote his latest book, “Only in Alabama: More Colorful True Stories from a Lawyer’s Life, 2016-2019,” which tells the tales of various court battles McPhillips has found himself in over the last few years.

McPhillips was joined by former Selma Police Department (SPD) officer Jeffrey Hardy, ousted City of Selma employee Carneetie Ellison and Selma City Treasurer Ronita Wade, all three of which are clients of his and figure heavily into his narrative on Selma.

McPhillips noted that much of his law practice has been dedicated to “standing up to bullies,” which he feels is often at the heart of legal struggles in Alabama.

“You’ve got to hang in there and fight to the end because justice isn’t free,” McPhillips said. “Freedom isn’t free.”

In his book are chapters about Alfa, which McPhillips said represents the “arrogance of power,” as well as Alabama Attorney Steve Marshall, whose PAC-to-PAC transfers McPhillips called “highly improper” and “corrupt,” and at least two cases represented by other attorneys in Alabama.

In discussing the debacles that Ellison, Hardy and Wade have faced, McPhillips chastised the behavior of Selma Mayor Darrio Melton but opined that it would take more than a municipal election to undo much of the harm that has been done to Selma over the past couple of years.

During his talk, McPhillips recalled a variety of stories from his time in the courtroom, including an instance in 1984 when he was referred to as “the white J.L. Chestnut,” as well as stories from his personal life, including the births of his two daughters and the adoption of his son.

Copies of McPhillips’ latest book, as well as earlier releases, can be picked up at his office in Montgomery or at New South Bookstore in Montgomery.

During its meeting Monday, which was moved up to accommodate the upcoming Thanksgiving holiday, the Selma City Council wondered aloud... read more