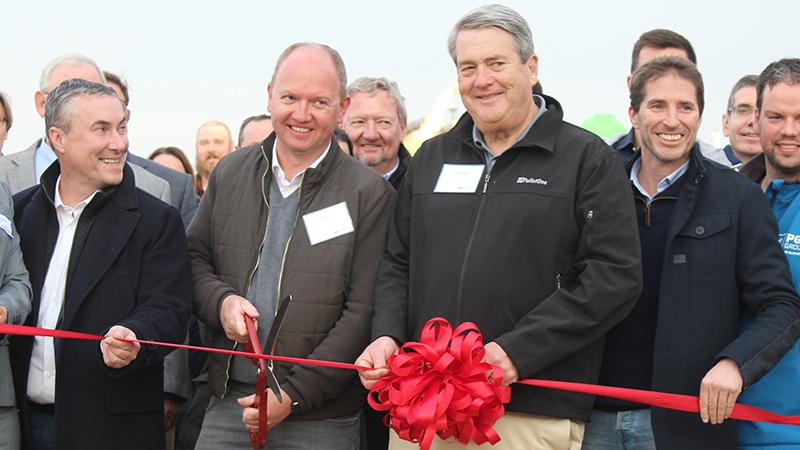 A ribbon-cutting ceremony for Sunbelt Forest Ventures (SFV) was held Monday afternoon to officially kick off operations for the new sawmill located at South Dallas Industrial Park.
The ribbon cutting ceremony was preceded by tours of the new facility and a brief presentation led by Selma – Dallas County Economic Development Authority (EDA) Director Wayne Vardaman.
Vardaman called the occasion a “great day” before thanking several people for their assistance in seeing the project completed.
Several elected officials were in attendance to show their support for the new Selma business, including Selma Mayor Darrio Melton, Miah Jackson and Carl Bowline of the Selma City Council, Dallas County Probate Judge Jimmy Nunn, Dallas County Sheriff Mike Granthum and Dallas County Commissioner Valerie Reubin.
The sawmill, which represents a $30 million capital investment in Selma, was designed to manufacture components for wood pallets from Southern yellow pine.
SFV estimates that the mill will produce as much as 100 million board-feet worth of pallet components each year.
The new facility will function as a non-traditional sawmill, specifically targeting logs suitable to manufacture components for wood pallets.
PalletOne, who has operated a pallet manufacturing plant in Selma since 2006, will serve as a primary customer for SFV.
The plant has already employed 25 workers and plans to launch a second shift in its second year of operations, increasing its roster to as many as 52 employees to accommodate increased production.
The completion of the state-of-the-art sawmill was made possible with support from PGS Group, a leading producer of sawn timber for pallets in France and Spain, and PalletOne, the nation’s largest wood pallet manufacturer.
Officials from the PGS Group led the SFV team in the design, installation and operations of the sawmill.
PalletOne, a primary mill customer, worked alongside PGS to provide guidance on the local timber market, best mill practices and employment standards.
EDA and Pioneer Electric Cooperative helped SFV in site selection and opportunity assessment for new business in Dallas County.
“The leaders in Dallas County and Pioneer Electric made sure the full resources for development were made available,” said PalletOne CEO Howe Wallace. “We have found Alabama to be a great place to grow our business. We are excited about this opportunity.”
According to Luc Grauwet, CEO of PGS Group, the company visited multiple sites across the United States alongside PalletOne before settling on the 50-acre site in Selma.
Construction for the sawmill began in Nov. 2018 and, according to Grauwet, advanced quickly, working for 11 months.
“I’m very happy for the team we have in place,” said Grauwet.
According to a press release from SFV, pallets are an $11 billion industry in the U.S. and it typically takes around five billion board feet of lumber to supply the nation’s pallet production requirements.
SFV hopes to play an important role in supplying that lumber.